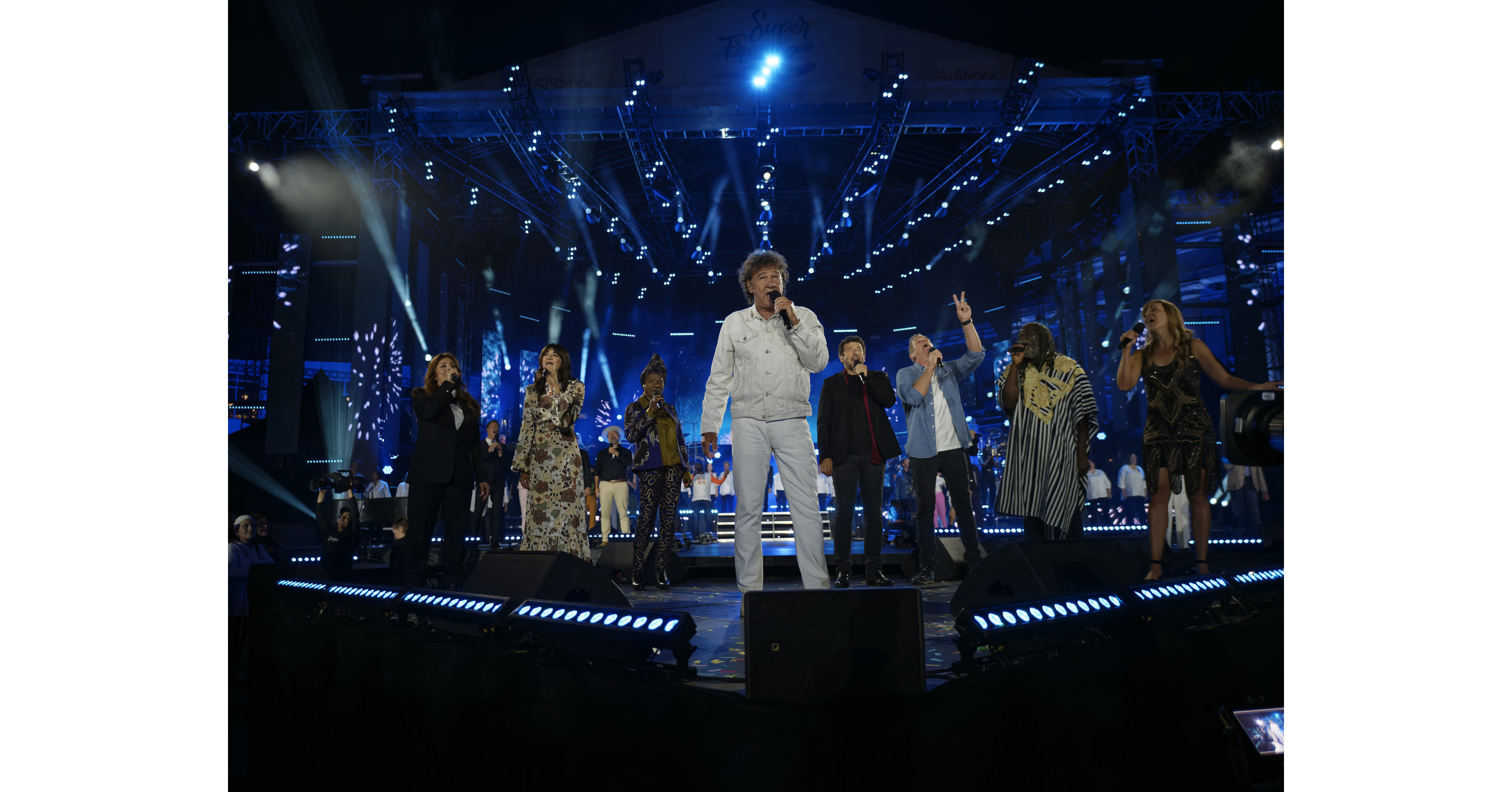 Delighted with the success of its event featuring French speakers from around the world, SISMYK is ready for next year!

QUEBEC, September 7, 2022 /PRNewswire/ — The first edition of the SuperFrancoParty, a francophone music and song festival held on Wednesday August 31 at the Agora de Québec, was a resounding success! A striking feature of the show is the presence of performers from several generations, with performers ranging in age from 23 to 80. In total, around thirty singers performed around forty pieces from around ten countries! Due to the huge demand and above all the unprecedented popularity of the event, a recording of the SuperFrancoParty will be broadcast in Quebec and Canada on TV5 Quebec-Canada and VATas well as worldwide on TV5 World. Francophone music lovers from all over the world will be able to attend this thrilling celebration of the French language.

Quebec City: A place of choice

Different French accents from around the world echoed in Quebec City, in the breathtaking setting of Old Quebec on the majestic St. Lawrence River. We couldn’t have asked for a better location in Quebec that the Old Port Agora for the first edition of this long-awaited event. More than 5,000 French-speaking spectators and music lovers enjoyed the hall with a clear sky with stars and a crescent moon, a luxurious river cruise boat, the illuminated Château Frontenac in the background, and a magnificent view of the city walls and the Upper Town! All the elements came together seamlessly to make the first edition of the SuperFrancoParty a resounding success in a postcard setting. Produced by SISMYKthe musical division of ComedyHa! , the evening was also broadcast live on Cogeco network and on two giant screens on the place of boaters. This allowed the largest number of music lovers to access the show for free!

Quebec City welcomes French speakers from all over the world

A show with surprising themes and chords

Rich, moving orchestrations and startling harmonies allowed people to experience the music rather than just hear it. The festive repertoire was a mix of original new songs, catchy tunes and timeless classics, and we discovered new faces, such as Mentissa, Rori, Woodney Pierre and Jill Barbier, and loved by musical legends like Michel Fugain, Garou, Isabelle Boulay and Corneille, to name a few. It was a journey through French hits and classics. A highlight was Robert Charleboisheadliner of the 1974 edition of the SuperFrancoFête, who performs his mythical song Ordinary and its emblematic I will come back to Montrealmodified for the occasion with a nod to Quebec City and sang a duet with his friend Patrick Bruel. This great musical celebration also gave rise to eloquent speeches by socially committed artists such as Kim Thuy, Maka Koto and Fred Pellerin, who delivered messages of hope, social values, solidarity, sharing and friendship. In a moving moment, the Franco-Breton singer and host Nolwenn Leroy underlined the 100th anniversary of René Lévesque.

Scott Prize and its ingenious musicians delivered meticulous arrangements that incorporated folk, classical, bluegrass and even Acadian influences with artists Salebeards, Nolwenn Leroy, Zachary Richard and Damien Robitaille. During the nod to the 1974 edition, Robert CharleboisThe group Bonenfant and Louis Jean Cormier took the stage to perform a nostalgic number. The warm and exuberant music of Tiken Jah Fakoly, Angelique Kidjo and magic system enlivened the party with rhythms inspired by their African roots and the music and traditions of their native land. The three hosts also had fun joining in with other artists for lively, crowd-pleasing numbers in unexpected pairings: The tree is in its leaves (Zachary Richard and Angelique Kidjo) and Bohemian (Were and Nolwenn Leroy).

The show ended with all the artists on stage to sing the iconic, and still relevant, anthem of hope from Raymond Levesque When men will live on love, spectators join in to create a choir of over 5,000 voices. The singer, visibly delighted, performs a second finale, Square of great menwith Patrick Bruel and all the other artists, and promised to meet again next year!

Thank you to our valued partners

The SuperFrancoParty promises to become an iconic annual event that will provide unforgettable and incredible moments of musical entertainment. This musical television event would not have been possible without the support of valuable collaborators and partners. SISMYK would like to thank its major partner QUEBECOR, the government of Quebec (Secretariat of the Capitale-Nationale, Ministry of Culture and Communications, Ministry of the French Language, Secretariat of Canadian Relations and the Canadian Francophonie), Quebec CityDestination Québec-Cité, the Center de la Francophonie des Amériques, the René-Lévesque Foundation, Fairmont Le Château FrontenacHilton Quebec, Delta Hotel, Air Canada, Solotech, REC4Box, VAT, TV5, Cogeco and the Agora of Quebec.

The SuperFrancoParty allowed Francophones, Francophiles and music lovers from the region to come together to celebrate Francophone culture as a whole, from the vast African continent to the snow Quebec, Acadia, Louisiana and Europe, the guardian of the tongue. This first edition contributed to promoting the development of Francophone culture by presenting artists from a growing and richly diversified community. SISMYK is incredibly proud of the event and plans to host it again next year. The opinions are also unanimous!

“This great musical celebration of La Francophonie was as entertaining as promised. The SuperFrancoFête will undoubtedly have met the expectations of the thousands of music lovers who converged on the Agora du Port de Quebec City on Wednesday evenings to watch the show, which will reach French-speaking viewers around the world.” – The sun

“In a postcard setting that included an illuminated Castle Frontenac Overlooking the stage from afar, timeless classics and new discoveries were performed during this exciting, rhythmic and refined show… Mission accomplished, promise kept! – Journal de Quebec

“Quebec City hosted a big party where nostalgia and musical discoveries created moments of pure pleasure for the eyes and the ears (…) It is difficult to summarize all the highlights of the evening (…) The artistic direction has put its finger on the head with unexpected duets (…) It looked like a national holiday at the Agora du Vieux-Port. – Radio Canada

SISMYK, the music division of ComediHa!, is a production company specializing in the creation, production, promotion and multiplatform distribution of various types of content: festivals, innovative and unique shows of different musical genres, tours, television productions, TV series, documentaries, variety shows and many more. Since 2008, SISMYK has produced major national and international events, as well as international stars, such as Madonna, the MDNA tour, Diana Krall at the Grand-Théâtre, as well as Paris-Quebec under the starsincluding many public holidays (2016 to 2021), Patrick Bruel with the OSQ, and, of course, Celine Dion on the Plains TV shows around the world. SISMYK’s mission is to promote Quebec culture and the magnificent regions of Quebec. The team of nearly 100 full-time employees has more than 20 years of experience and enjoys an enviable reputation in the cultural community, both locally and internationally.