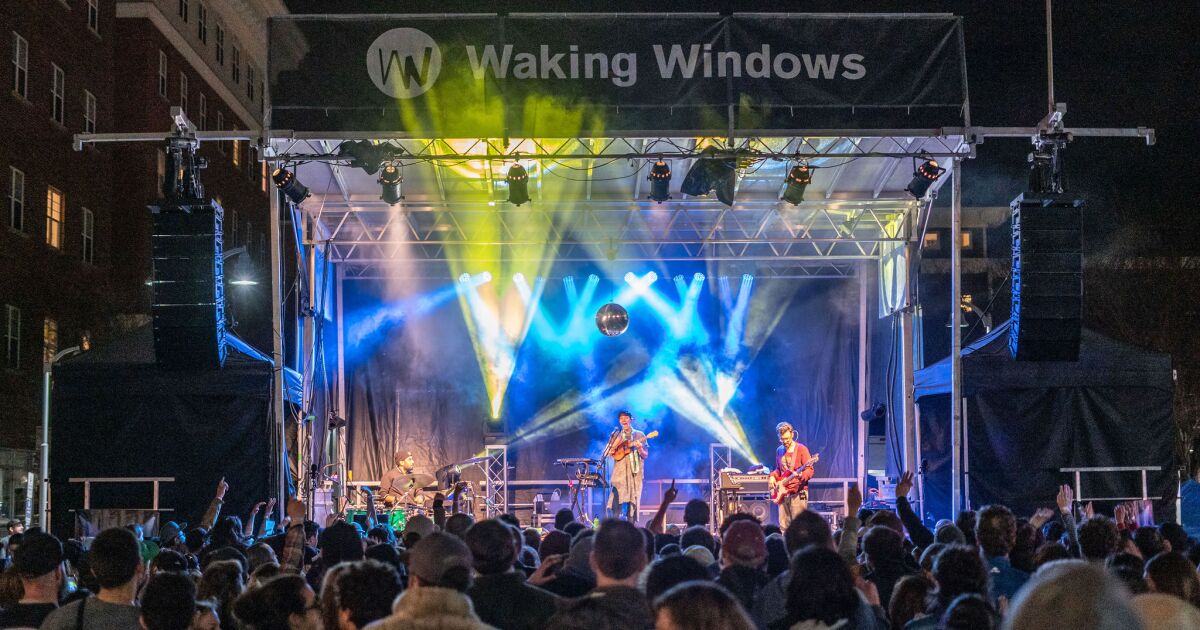 Waking Windows in Winooski, like so many live music festivals, is making a post-COVID return after a two-year hiatus.

The festival, which runs May 13-15, dates back more than a decade to a pub in downtown Winooski. This iteration at Monkey House ran for 12 days, featuring dozens of bands on a small stage.

The event is now concentrated over three days and attracts thousands of people to Winooski’s pubs, clubs and outdoor stages to hear local, national and international musical artists and DJs. He even offers a pub crawl for book lovers.

This year’s headliners include recent Best New Artist Grammy nominee Japanese Breakfast, who was scheduled to perform Waking Windows in 2020, but the event was canceled due to rising COVID-19 cases. .

A staple on the rock touring scene since the 1980s, Dinosaur Jr. will also headline the music festival.

Vermont bands and DJs bolster the bulk of the live music offering, performing on outdoor stages, inside churches, and in dozens of pubs and restaurants lining Onion City’s main streets .

VPR’s Mary Engisch spoke to Waking Windows founding member Paddy Reagan about the return of the music festival. Their conversation below has been edited and condensed for clarity.

Mary Engisch: And you’ve been on hiatus for two years, two full years, since COVID? Something different or new or something that people who have been before can expect to have changed in the last two years?

Paddy Reagan: We made a conscious effort to scale things down a bit. I think in the past we had 17 sites. I think currently we’re operating with 13, which doesn’t seem like a huge downsizing.

But it’s really – from the organizers’ perspective – it took, you know, a lot of planning and scheduling our plates.

But it also meant that we weren’t able to book as many local bands as we normally did. It’s really important for us to shine a light on the local music scene. And it was a tough decision to make, because it basically needed, you know, 25, 30 or 35 slots where we could get local bands playing, which is a tough thing to do.

So some bands that have played every year are not playing this year. And what’s really fun is that there are a lot of really cool new bands that have popped up in the last few years and are playing.

And so it was kind of this delicate balance of trying to figure out how to honor the scene as it exists right now. And how, you know, to honor that stage because it’s been 12 years since we started the festival.

There are people who go to see live music whenever they get the chance. And then there are people like me who are extremely introverted and don’t like being in large crowds, but love live music. So, are there any tips or advice for different types of fans who really want to be able to come to the festival and tune in?

Of course, yeah. I think a good first step is to go to the Waking Windows website. We have a playlist of all the bands playing and we have an idea of ​​what to expect. And then you can sort of organize your own weekend.

There are people marking their program, and you can see them – they’re running from place to place, and they’re so invested in seeing everything they can.

And you know, we encourage people, if they feel like wearing a mask inside certain rooms, do it. Do what makes you feel comfortable at the festival. You know, if you’re a little hesitant to be inside, there’s a ton of music happening outside on the main stages, and there’s plenty of room to spread out as needed.

You know, like so many businesses and so many things coming back to life after the pandemic, there are a lot of issues to deal with.

We’re doing this festival because we love Winooski, because we love creating spaces for people to come together and enjoy the music and enjoy each other’s company. And there’s going to be bumps in the road for all of us and just kind of, you know, be patient and considerate with not only the people who work at the festival, because 90% of them are volunteers, but also with the people around you.

Dozens of groups are ready to play. Where will they all settle? And what about, you know, people coming for food to go along with their live music?

Meet at the main stage, which is on Winooski Falls Way, which we close Friday and Saturday. This is where our headliners will be.

There will be food trucks. You can cross the roundabout, we will have food carts there. There are a bunch of bands playing there.

There are many participating sites all around Rotary. There will be the Methodist Church which has music. And you know Monkey House and Mule Bar both have food and music.

The best place to park in Winooski is in the kind of hidden parking lot behind Spinner Place. Exit on the third floor and head to the VSAC building, where our ticket office will be. Get your daily or weekend pass, whatever your purchase.

It’s kind of like “choose your own adventure”. Bring your whole being, but also know that everyone is going to bring their whole being.

Do you have questions, comments or advice? Send us a message.