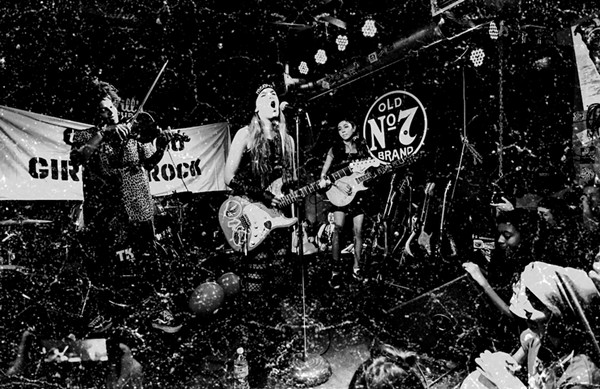 Not to be immediately metaphysical, but can we agree that music has unique healing properties among the various arts? And can we agree that we could all, especially kids, use a little musical healing right now? Is everyone still there? Good.

To that end, the folks behind Orlando Girls Rock Camp are back with an in-person camp this week – after a year of Zoom Camp in 2020 – and as they focus like never before on the mission of providing Girls, Girls. trans and non-binary kids – many of whom have participated for years in a row – with the tools and know-how they need to be our next generation of rock stars, this time around they’re also focused on healing. and on the mere presence of one another.

The theme for this year’s camp is Re / Connections (love the subtle nod to West Coast DIY institution Re / Search) and that’s the intention behind everything they’ll be doing. Reconnect, readjust and reaffirm a love of music – and play that music – after a year spent mostly in isolation.

â€œWe just want to be a safe, calming and nurturing place. Come here and have fun with us, it will be really amazing,â€ said Ginny Wisdom, Director of Volunteer Services at OGRC.

Orlando Girls Rock Camp is a non-profit organization with a committed team of volunteers – and fully vaccinated for COVID-19 – that taps into all areas of local expertise. â€œIt’s a diverse mix; we have teachers, counselors, performers, some of the parents of the campers,â€ says Kristin Howard, OGRC marketing manager and drummer for local group Hot Hands.

The commitment of Girls Rock Camp volunteers was put to the test last year, when they decided to run camp virtually, learning the benefits and pitfalls of real-time Zoom alongside the campers.

They made it work through their tenacity, their passion for their work, their patient and enthusiastic students and their innovative personal touches that transcended the digital divide, of daily playlists (courtesy of Howard, also known by his alter ego DJ “Machine Gun” Kristin) to camp counselors personally delivering instruments to campers – “A camper had the front of his house decorated like it was a party, collages and banners, and that was just me, delivering a guitar, â€Wisdom recalls – to regular shipments of various supplies and goodies.

â€œIt meant a lot to us to be able to come together. No matter how it was or the ability, we just wanted to be there,â€ says Wisdom. “We’re all about adaptation.”

The initial plan for this year was to run the camp in two different sessions, for pre-teens and teens, as a virtual and in-person hybrid model. But, as we all know, in 2021 the plans change and then change again. Foam. Rinse. Repeat. So by the time you get this issue on your hands, the Orlando Girls Rock Camp will be halfway there.

Camp runs Monday July 5 through Friday July 9 at the Broadway Methodist Church in downtown. There are, at the time of this writing, almost 20 participating campers in an age range of 8 to 18 years old. Admission to the camp is based on a sliding scale, free – $ 150, so as not to create economic barriers. â€œWe are a non-profit organization, we don’t want to exclude anyone from this experience,â€ says Wisdom.

Campers start the week by choosing the instrument of their choice from the Guitar / Bass / Drums / Vocals toolkit, without any prior musical knowledge, and then divide into ad hoc groups for the duration.

Individual instrument instruction gradually becomes group practice, and these new groups choose a cover song to perfect during their week, adding their own twist – new lyrics, riffs, etc. – and prepare him to play for the final camp showcase.

â€œAn original song in five days is a lot to ask,â€ Howard says. “It takes the pressure off a bit for everyone because we weren’t even sure we could do a face-to-face camp. So we got them to do covers, but changing the song to their own thing.”

This is not a one-time summer pastime, however, make no mistake about it. â€œThese groups are real,â€ says Wisdom. “Some of them have stayed together since they started at the camp years ago. They continue to train between camps.”

Camp activities will also include instruction on equipment and instruments, DIY ethics, patch sewing (!), Yoga / mindfulness lessons, as well as personal autonomy and consent. The campers have meals together and work on a zine that culminates in common during the week.

The organizers of Girls Rock, for the first time, ask you do not go to this year’s showcase. Wait, listen to us! They want you to watch it, but they would rather you watch it via their simulcast live on Saturday July 10th. where campers show their chops live, will take place at the Ten10 Brewery.

â€œIt will be much more discreetâ€¦ This year, we will limit the capacity to four people per camper,â€ explains Wisdom. “But we’re trying to find a way to get it to the larger Ten10 space so that everyone can come and watch it.”

Right now, however, it’s a rush of last-minute preparation and impatient anticipation. Girls Rock Camp is a labor of love for the all-volunteer staff. “I’m not saying we’re jostling each other, because we’re not disorganized, but there are always a billion last minute things to do.â€¦ But we’re ready! We can do it in the blink of an eye,” says Wisdom.

This year promises to be part a family reunion, part a crash course in education, and it’s all a testament to the purifying joy and healing power of playing music with your friends just for the fun of it – whatever. on an arena stage, a front porch, the Front Porch Festival, a stuffy garage, Uncle Lou’s, a Zoom screen or, yes, Ten10 Brewery this very weekend.