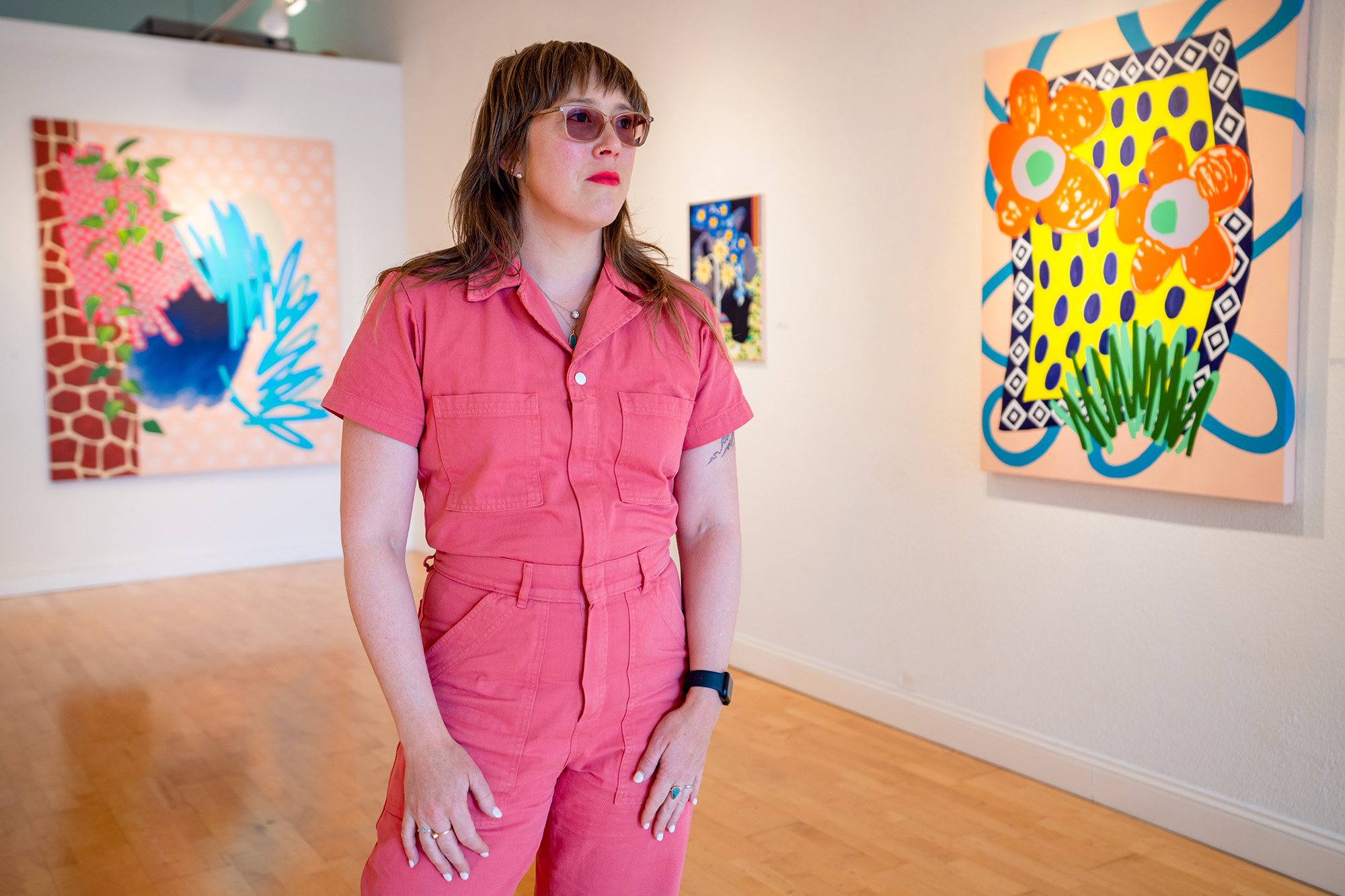 Creative people can have an edge when it comes to dealing with grief. Writers can create a poem or a story, musicians can compose a song, and multimedia artists like Amber Jean Young can tap into a source of resources to deal with loss. When her mother, writer and musician Pegi Young, died of ovarian cancer in 2019, it seemed natural for Young to turn to her first love, painting, in order to create a tribute. The resulting artwork has become an exhibition called Pegi’s Garden, on view through April 30 at the Bryant Street Gallery.

Young speaks fondly of growing up at Broken Arrow Ranch near Kings Mountain. Being surrounded by nature, with lots of trees and an open sky, was definitely an inspiration to her as a child. But she was also touched by the many role models that existed within the house. “My mother was an avid collector of textiles, including Navajo weaving, baskets, Persian rugs and lace,” Young said. She laughed as she repeatedly recounted that when walking down a street in Europe there was often “a sharp right in a lace shop”.

Young said his destiny as an artist was locked in soon enough. “I took art classes in kindergarten and it started me down a path that I have never diverged from.” She attended elementary and high school in Portola Valley and continued her high school education in San Francisco. After high school, she applied to a number of smaller liberal arts colleges in the Midwest and chose to attend Kenyon College in Ohio. When asked why, as a California native who enjoyed an idyllic childhood on a sprawling ranch, she chose Ohio, she admitted, “Every February I ask myself the same question!”

She returned to the Bay Area and completed a graduate degree at the San Francisco Art Institute, where she focused primarily on painting. Young is quick to thank his parents, Pegi and famed musician Neil Young, for recognizing and supporting his predilection for the arts. “Few people get the level of encouragement that I received – and the early identity as an artist. This is who I am, this is what I do,” she said.

A residency at the Djerassi Resident Artist Program in Woodside (“just across the mountain from her home”) was a turning point in her development. “That moment was really important to me because I continued to create a series of quilts there that were all about location.”

For several years, Young worked in mixed media, textile art and quilting. In fact, Bryant Street Gallery owner Karen Imperial visited Young’s studio in Berkeley with the intention of seeing her textile work. She recalls: “I walked into the studio and there were very few textiles but there were these paintings. She told me who her mother was and that she had died of ovarian cancer and that was how she experienced her grief. I loved the idea of ​​showing this work and decided that we would donate a substantial portion of the proceeds to ovarian cancer research.

Young said that after her mother died, she needed to “reframe.” “I couldn’t do the same job as before. It wasn’t the same world,” she said.

The paintings, however, reflect the influence of all the years of working in textiles. They start with the idea of ​​a pattern, the artist says, and then are worked on in layers. The exuberant and boldly colored still lifes are executed in acrylics and are inspired not by an outdoor garden but by the many indoor plants her mother tended. In fact, one of the smaller paintings is titled “She must have had 40 houseplants”. She recalled a plethora of vines and rhododendrons in the house and a patio full of flowering plants and succulents. “It really was a beautiful place,” she said.

Young explained how, very early on, his work was influenced by the pattern and decoration movement of the 1970s. the visuals of it and the reaction to the very masculine art of the time.”

“My art has a very feminine undertone to it, especially this body of work,” she said.

The bright, almost daytime colors of these floral paintings were specifically inspired by her mother’s later years. “She lived a lot of her life in black because it was dramatic. But then she switched gears and started wearing big patterns and bright colors. This change in the latter part of her life l made me feel really good.

The creation of these paintings obviously had the same effect on Young. “These colors helped me get over the grief of his passing. It supported me and made my brain feel good.

Imperial said visitors to the show had a similar reaction. “The reactions at work have been incredible. We’ve sold a lot of them and people are just thrilled to see them. Pegi Young was hugely loved by the community and known for her work with children with disabilities.

Pegi was co-founder of The Bridge School in Hillsborough to serve children with severe physical disabilities and communication needs. The Youngs’ son Ben and Zeke, Neil’s son from a previous marriage to actress Carrie Snodgress, both have cerebral palsy. Pegi and Neil, who divorced in 2014, also co-founded the Bridge School Benefit Concerts, which helped raise money for the school from 1986 to 2016.

Young said her next work will again reflect her love of textiles. “I will continue to build compositions around motifs, with the theme of the mother/child relationship.”

And what would his mother say about this exhibition? “I hope she would be very happy with the show – I know she would be,” Young said with a smile, “She liked the bright colors.”