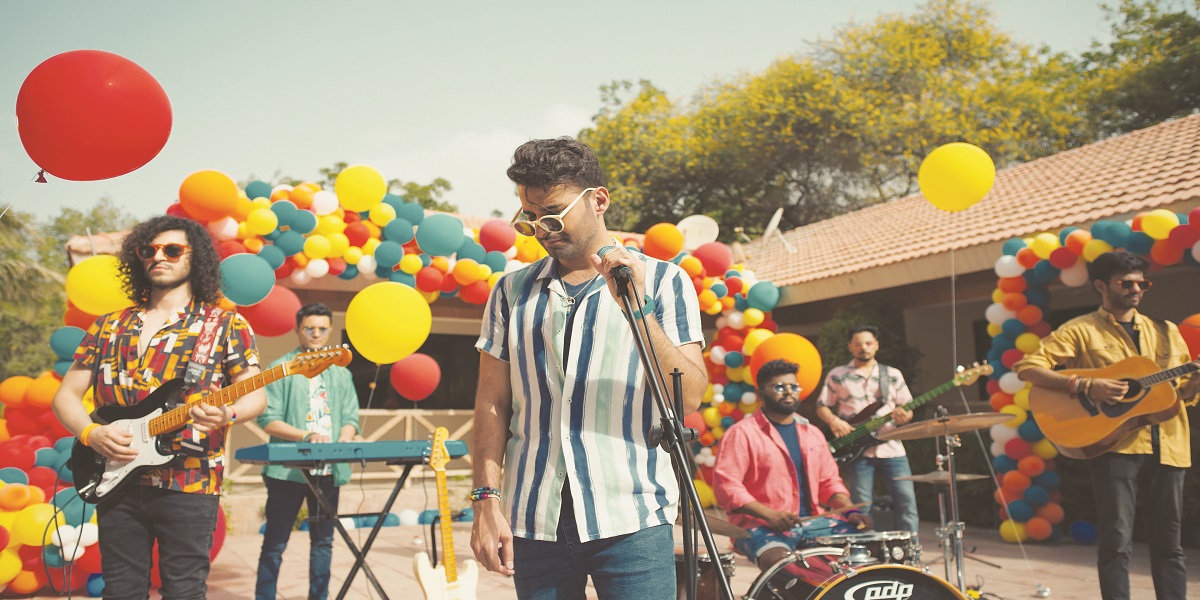 Kashmir, an alternative rock band formed in Karachi in 2012, made several highlights in the Pakistani music scene by winning season 2 of Pepsi Battle of the Bands in 2017. They continued their winning streak by producing several songs and performances. prominent, including a studio album titled Khwaab. His current line-up of members includes Bilal Ali as lead singer, Usman Siddiqui as bassist, Vais Khan as lead guitarist, Shane J. Anthoney on drums, Zair Zaki as rhythm guitarist and Ali Raza as keyboardist.

From the start, with a name as striking as KASHMIR, one had to wonder what had pushed the group to establish itself under this label. Turns out they weren’t always known by that name and had a pretty funny anecdote about how they got there. Usman Siddiqui, the band’s skillful bassist who provided fans with plenty of iconic riffs, told us the story: “At the very beginning we were called Quasars, which is the name of a bright light emitted by a star. In the universe. We were avid viewers of the History Channel and I guess that’s where we got the name from. Eventually, when we started doing concerts, people had a hard time pronouncing the name, so we became known as “Kausars”. It wasn’t until we worked on the song “Rani-e-Kashmir”That we have received comments from experienced musicians that our band name must be commercially viable to survive in the industry. Then began a whole series of brainstorming on each potential name, where at one point Vais even started to come up with Persian titles.

Vais Khan, the group’s lead guitarist, known for his surprisingly rock star hair, continued the story: Contained the word Kashmir. We realized how austere and viable the name is. Not only that, but it was a perfect fit for the project we were on at the time, as well as being culturally and emotionally relevant to us. So we immediately opted for the name KASHMIR.

While we are grateful to the group for having their Eureka moment which led to the unforgettable name KASHMIR, how all of them came together to form a group is an even more fateful origin story. Siddiqui, who has been with the group since even before the group was formed, shed light on the subject: “We have always been six people, even if the programming was different, Vais had always been with us while Ali and I had been friends since elementary school. So we have had this dynamic for a long time and we were friends long before we became musicians. There was another singer, Mashal Shahryar, but he left in 2011 and Bilal joined his place. The current lineup you see has been like this ever since.

Khan then summed up the origin of the band perfectly: “You could say that we were six friends who loved music and decided to form a band. “

While many of us may not have been privy to the group’s intimate history, nearly all fans know of their rise to fame that was reinvigorated by their time on the show. Pepsi Battle of the Bands. The competition includes several groups competing to choose the best of the best, where KASHMIR emerged victorious. Bilal Ali, the band’s vocalist who has conducted many of the band’s hit songs, translated the band’s experience on the show: “The day we walked the set for the first time, we saw 20 bands. , some of us a few years now in festivals and so on as established musicians It became like a staircase of misery where the more you went forward and saw your competition, the more you began to doubt your own abilities.

The band present their eventual victory in the show as the best but most difficult thing to achieve: “Maybe the fact that we had been friends for so long and had a different dynamic or maybe it was because we had to. performed our original songs, these elements have often become our saving grace. We had always worked on original songs since the start of our music career, and every time we landed in the playoff round which was a lot, I mean you saw us in the danger zone in every other episode we were saved by one of our original songs.

As for the band’s effortless group dynamics, something we saw a lot during their time on the show, Shane J. Anthoney, the band’s talented drummer, spoke about how their close relationship protected them, “Every once we had performed an original song like Faislay Where Soch, we hadn’t really practiced them before. The previous years of jamming together, mutual trust and our muscle memory are what worked for us. “

Siddiqui reflected on their overall journey in the show that has taken the group to many peaks and valleys: “Obviously, it’s natural. Not all of your performance will be good in such a competition. Sometimes they’ll be really good and set a high standard, and other times you’ll think you did well, but it doesn’t resonate that way with the judges. So I think we’ve learned a lot from the ups and downs that we’ve seen in our musical journey. And at the end of the day, the good thing is that you’re with your friends, facing it all together.

KASHMIR has been active in the Pakistani music scene since then, with an entire studio album to his credit and several live feature films. The group tends to dabble in alternative rock most often, but their most recent single, Ayi Bahaar, which delves deeper into pop and immediately brightens your day every time you listen to it, was a surprising twist. Curious about how the band decides their trajectory and what genres to play with, we asked what their creative process is?

Ali started to raise the curtain and explained how the band works inside the studio: “We never made a decision on what genre to do or not to do, instead we always watched. what we are feeling at a particular time. And ironically enough, the group tends to feel the same way at some point in time, especially when we’re going through a specific phase of our lives together. He then spoke about their recent single: “When it comes to the track Ayi Bahaar, you could say it’s a love song. Our songs and lyrics revolve around our travels and the issues that we usually and individually face, no matter how small, for example, we have songs about insomnia, another about fear of the dark, etc. We tend to leave it to the viewer to interpret them. But we have never set a limit, nor limited to a certain niche, nor followed a trend. Just like Ayi Bahaar, there’s a song with a similar vibe in our next album that will make you think the whole album is upbeat. But then there are songs like Khuwaab that have a whole different rock vibe and you’re going to be confused again about our kind of focus.

A mark of a true artist is certainly to follow his feelings rather than doing something for the sake of it. Anthoney, as succinct as ever, expressed their artistic process admirably: “We try not to force the result, but to listen to our hearts instead. “

With such tendencies to change genre, we could not help but wonder about their musical inspirations. What we assumed was a unanimous proclamation for an artist or two turned out to be a state of individual frenzy where each member had their own specific inspirations and influences. While Siddiqui was an avid Led Zepplin and Kings of Leon listener, he also voiced himself as a crazy Noori fan. Khan, on the other hand, had a completely different playlist that mostly included instrumentals, like Animals as Leaders and Joe Satriani. Anthoney also had an interesting journey with his musical inclinations: “Growing up my dad listened to a lot of rock music like Scorpians and Deep Purple, so that inspired me. It wasn’t until I joined the band that I finally started listening to a lot of Radiohead and I think my soundscape changed a lot and more towards the vibe of the band.

Radiohead had an unmistakable appeal within the band, where Siddiqui helped set up the pitch: “Sometimes when we often lived together too, Radiohead and Vital Signs were always playing in our rooms, like constantly.”

Living and being constantly together as a band and making music can seem incredibly fun, but the pandemic has thwarted many of the band’s plans. Not only did KASHMIR’s album release sadly coincide with when Covid completely erupted, the lockdowns also set aside many of the band’s promotional plans and gigs. Khan detailed the turbulent times the group has faced amid the events of the past two years: not pushing through all of our plans for this. There was a whole tour planned and it all fell apart so I think we were a bit lost and in a dilemma as to what we should do now? Along with the release of the album, there was the music video for Dhoop directed by Umar Anwar, someone we really respect and who was very involved in the song process, so both things got really emotional for us. There was no motivation available during the lockdown and it was really frustrating. “

As lockdowns affected all aspects of our lives, it was important to stay motivated and motivated in a positive way. One way for the group to stay dedicated to their craft was to remember their many accomplishments and when they really felt happy at work. The group relayed this process by recounting a recent experience: “Just three weeks ago, we did a concert in a university institution, and the atmosphere was completely different. We had a completely different sparkle in our eyes. There comes a point in such live concerts where you as the musicians stop singing and the audience starts to carry the song. And this feeling is indescribable. These concerts and the feeling they give are very important to us and honestly to any musician. They give us that energy and push us to keep improving our music. When asked if they were afraid to return to the live music scene, Siddiqui told us how they felt: “We were really excited about it. I couldn’t even wait for the balance to end before I could get on stage. I think nervousness and stage fright were killed in the days of Pepsi Battle of the Bands “

Although KASHMIR has developed an impressive discography, fans have yet to see any collaborations on their albums and when asked about their dream collaboration, everyone in the group had no qualms about choosing their choice. : “Atif Aslam! We think our collaboration with the artist would be just amazing one day.

They then talked about their future plans: “We’ve already done a pretty interesting collaboration on our next album, but we can’t really tell you that.” Staying on the low side as always, we can only guess at who and what their new album will feature, but we’re certainly excited about that and all the places KASHMIR will go, because we’ll be right there, in the front row. , shouting the words to their songs.