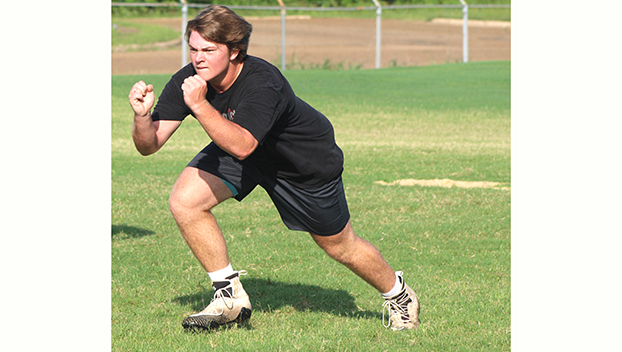 Cathedral senior Tyler Gregg has been playing football since third grade. He was a lineman then as he is now.

His best memory of football is youth football. After hitting an offensive lineman, he pushed the lineman back into the running back like a shield. It was this game that made him addicted to the game.

“It was pretty cool. We used to get these shirts in AYA for little rewards, ”said Gregg. “It was the first time that I received a shirt. I realized this was something I could be pretty decent at. It was a pretty cool moment.

Football is a way for him to keep fit and free himself by hitting people. In matches, he will play left guard on the offensive line. On the defensive line, he would play a defensive tackle to the right or to the left.

Playing on both sides of the ball is tiring, he said. Cathedral does not have enough players to have two separate starting lines. Many starters on the offensive line must also start on defense.

Cathedral has seniors Paxton Junkin, Christian Wright and Harper Jones in addition to Gregg. Head coach Chuck Darbonne said Gregg is the only senior who would play on the offensive line this season.

The rest of the starting line are juniors, who have a close bond with Gregg. Junior lineman Wyatt Fair and Gregg work out a lot together in the weight room. They formed a friendship.

“He’s pretty much been my partner since he’s been here,” said Gregg. “We are friends off the pitch. I’m pretty close to Paxton. I am a good friend of Christian and Harper. I wish more seniors had played, but that’s how it is.

After soccer training, Gregg goes to work at his father’s veterinary hospital in Vidalia. Before the animals are operated on, he helps set up the tables. He sweeps and does the laundry, and he walks the dogs three times a day.

Darbonne said Gregg had excellent guitar skills in addition to a strong work ethic. He plays a mix of country, blues and rock. His musical inspirations are Stevie Ray Vaughn, The Eagles and Joe Walsh.

“Ever since I was a little baby, I love very loud rock music,” said Gregg. “I thought to myself why not do it. I picked up a guitar around year two and kept building on it and building on it. “

After high school, he hopes to pursue a career in music by studying it in college at Belmont University in Nashville or at the University of Louisiana in Lafayette.

“I think I’m going to get my bachelor’s degree in music and music media. I think I will pursue a musical career, ”said Gregg. “The drive to Belmont is scary. It’s like nine o’clock, but I think I can make it work.

During soccer practice, Gregg wore a green baseball cap with a mallard duck in flight. His family recently set up a duck camp in Arkansas, just across the Louisiana border, he said.

Although he hunts deer, he said he was not a quiet person. He likes to hunt ducks more because it can be noisier.

“It’s really relaxing. You sit there and it’s just quiet, ”said Gregg. “Or at least it’s quiet until you shoot.” It is very beautiful. I’m pretty much sitting blind with a bunch of buddies. We hang around and catch up with things while we wait.

Cathedral has a shooting team, and although Gregg didn’t make it last year, he said he might try it this year. For duck hunting he uses a 12-gauge Beretta. He is also a baseball player and will be making a diamond comeback this spring.

Before duck season, stag season, and baseball season can begin, there is a football month. The Green Wave players are also one month away from playing their first football game against Madison-Ridgeland Academy. Gregg said he looks forward to the coming season.

“I’m curious how we’re going to do this year. We lost some really good players last year, but I think we have a lot of good ones here now. I’m curious how it’s going to go, ”said Gregg. “Playing football here is definitely worth getting up early. It’s pretty exciting. There is nothing like the feeling of a Friday night, like the smell of burgers and all that. I know I will miss it.