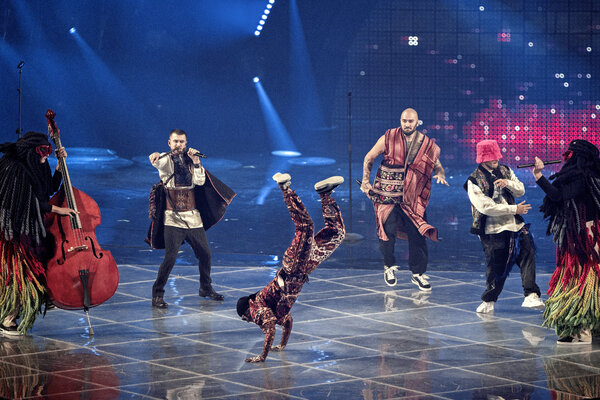 Tonight, there is an act that everyone is looking forward to: Ukraine.

The Kalush Orchestra “Stephaniehas all the elements of a Eurovision hit: high-speed rap, catchy folk singing, break dancer dressed as a carpet. And after the invasion of Russia, many Eurovision fans want the band to succeed.

Here’s everything you need to know about the group’s trip to Turin:

Who is the Kalush Orchestra?

Kalush is the brainchild of Oleh Psiuk, an Eminem-obsessed rapper from the town of Kalush in western Ukraine. In a recent video interview, he said he raps in Ukrainian to prove that people are wrong for saying the language doesn’t work for rapping.

Since 2019, his group – including the mysterious MC Carpetman, dressed in a head-to-toe bodysuit with traditional rug designs – has had multiple hits in Ukraine.

How did they get to Eurovision?

They almost didn’t. In February, the group finished second in the Ukrainian qualifying competition behind Alina Pash, a pop singer. But after her appearance, she had visited Russian-occupied Crimeafrowned upon in Ukraine, Kalush Orchestra took its place.

A few days later, the war began. On the night of the Russian invasion, Psiuk said the band were returning home from a gig when they heard the first explosions. He stopped thinking about music. “My main goal was to survive,” he said.

What is the song about?

Psiuk said he wrote “Stefania” about his mother, and it includes lines like “she rocked me, gave me rhythm.” Today, many Ukrainians see it as a metaphor for Ukraine, especially the lyrics “I will always walk towards you through rough roads”.

Yes, the Ukrainian government has declared that men between the ages of 18 and 60 should stay put and in case they are needed during the war, but Kalush members received special permission to participate in Eurovision.

The whole team of the group is not in Turin. Slavik Hnatenko, who runs the group’s social media, is fighting in Ukraine. In a video interview from Kyiv, Hnatenko said he felt the group’s Eurovision appearance was “equally important”. “It’s a chance to show the world that our spirit is hard to break,” he said.

Does ‘Stefania’ play a role in the war?

Hnatenko said he hears “Stefania” every day in Ukraine. He had even, somewhat bizarrely, seen Russian soldiers using it in TikTok clips, he said, apparently not realizing it was Ukraine’s Eurovision entry.

Eurovision aims to be apolitical. Will this affect Ukraine’s performance?

In the video interview, Psiuk said he would not make any strong political statements during the contest. But that is unlikely to stop people from thinking about war. At the end of the group semi-final performance, Psiuk said: “Thank you for supporting Ukraine.” The audience – many of whom were waving Ukrainian flags – went wild.

What will happen to the group after the competition?

Psiuk said that even if they win tonight, he will come back to Ukraine. He ran an organization there to provide people with medicine, transport and housing, he said. And he was ready to fight if asked. “We will have no choice,” he said: “We will be in Ukraine.”