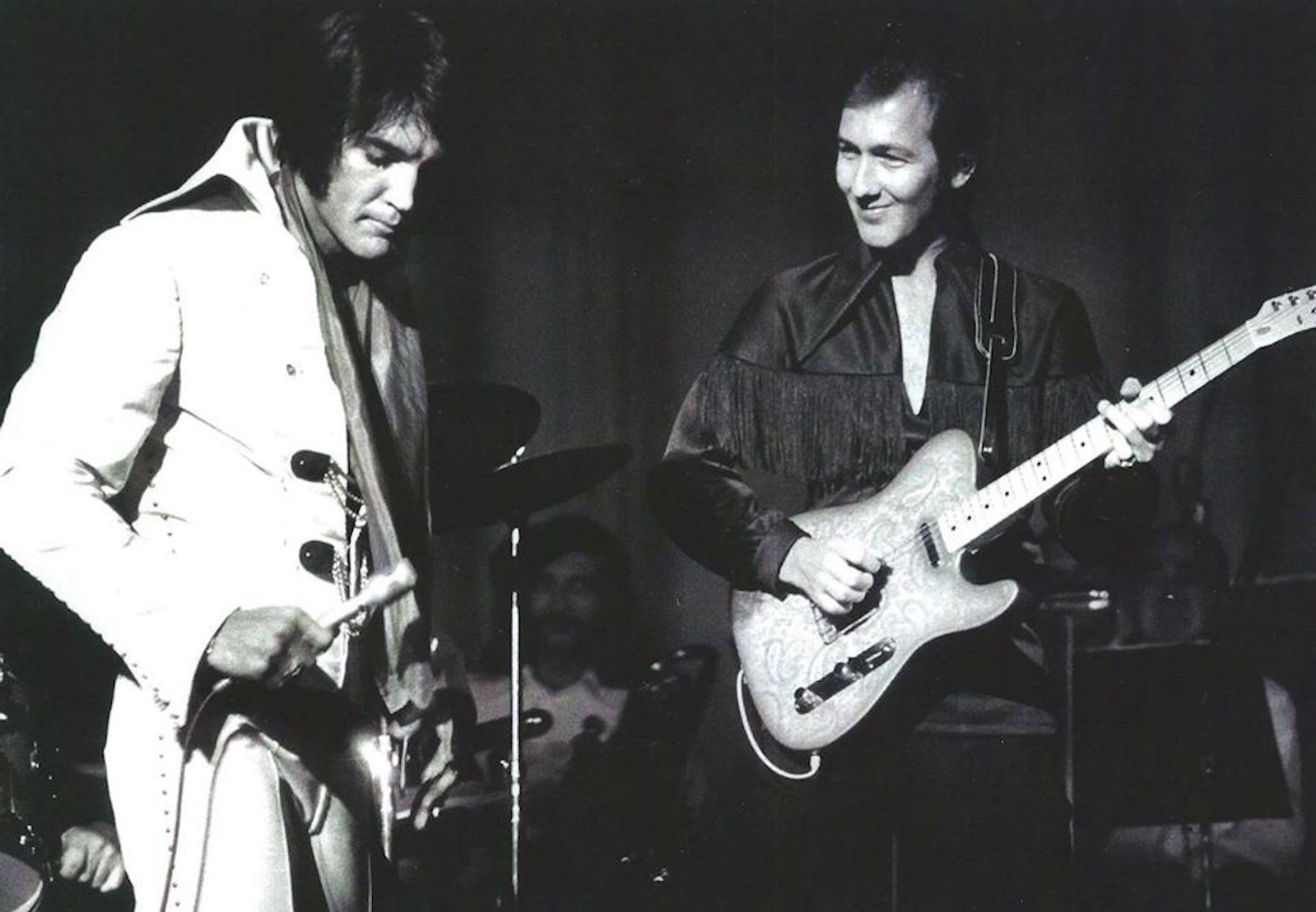 I was asked, “Who is the most famous person you have met? I met and took pictures with George Jones, Kevin Costner, Demi Moore and Pam Tillis to name a few. I even met Donald Trump when he brought the Miss USA pageant to Shreveport and once I crossed my eyes and shared a smile with Yoko Ono in New York City. You probably know all of these names, but I have to say, “The most famous person I have met is Dubberly, Louisiana’s favorite son, James Burton!”

Jacques is a musician. Not just an ordinary musician, but one who has reached the pinnacle of success. Some people may not recognize their name or face. But virtually everyone who has listened to music in the past six decades has heard it.

When Burton was young, his family moved 30 miles west of Dubberly to Shreveport. When he was a young teenager, he asked his father to buy him a guitar which he saw in the window of a local music store. No one knew back then that music would open the world to James.

Within a few years, he was good enough to enter a talent competition open to all ages. James was around 14 and won! The host recognized the prodigy and asked him if he would like to be part of his group.

It was this contact that introduced young James to The Louisiana Hayride where he became the staff guitarist. He has performed with many guest artists including George Jones, Linda Brannon, Bob Luman and David Houston to name a few.

James was asked to do some local recording work during this time. He recorded a few at RAM Records with Mira Smith and at KWKH Studios with Bob Sullivan as sound engineer. Dale Hawkins wrote the lyrics and James wrote the music for a song called “Susie Q”. This song, and its iconic opening lick, has become one of the 500 Rock and Roll Hall of Fame songs that shaped rock and roll!

Burton’s talent has not escaped Hayride’s direction. Louisiana Hayride producer Horace Logan quit her job and took 17-year-old James Burton with David Houston, Bob Luman and James Kirkland to Los Angeles, California to make the second * Rock and Roll movie, ‘Carnival Rock’ . (* The first Rock and Roll movie was “Rock Around the Clock” by Bill Haley) James’ guitar work shines in this movie. You can find clips of the film on YouTube.

Carnival Rock was filmed in the same studio where the popular television series “The Adventures of Ozzie and Harriet” was filmed. Ricky Nelson, Ozzie and Harriet’s loving son, wanted to form a band and after hearing James, decided he had found his guitarist. Since James was only 17, Ricky’s parents had to convince James’ parents to let him stay in Los Angeles. So they let James live with them and have a guest role on their TV show.

Ricky Nelson’s music developed around the style of James, which has been described as country-rock or rockabilly. James traveled and performed on most of Nelson’s songs over the following years.

During the induction, Richards showed everyone that he always carried a picture of James Burton in his wallet. Many other guitarists like Brian May of the band ‘Queen’, Pete Townsend of the band ‘The Who’ and Vince Gill all say that James has been one of the biggest influences in their careers. James is famous for the famous!

In 1965, James started working on a TV show called â€œShindig! This exhibit made the phone ring, and in no time, James was LA’s most wanted studio musician. He has recorded over 400 albums. If you’ve ever listened to The Beach Boys, Johnny Mathis, Barbara Streisand, The Monkees, Jerry Lee Lewis, The Mamas and The Papas, Judy Collins, Glen Campbell, Merle Haggard or Johnny Rivers, you’ve listened to James’ guitar!

It was around this time that he got a call from Elvis Presley, who asked James to be on his comeback TV show. James was in the middle of a recording session for Frank Sinatra and had to decline the offer. However, the following year, Elvis asked Burton to organize the TCB group for his show in Las Vegas. It became an iconic part of Elvis ‘live shows where he was saying “Play it, James” leading up to one of James’ solos! James played with Elvis until Presley’s untimely death in 1977.

John Denver has asked James to play on an upcoming European tour. It turned into a collaboration that spanned the next 16 years where they recorded 12 albums and toured the world. Denver died in a plane crash in 1997 and James spoke at his memorial service.

Burton recorded and toured with Elvis Costello on and off for about a decade. And, in 1988, he played a prominent role on Cinemax’s acclaimed special, “Roy Orbison and Friends, A Black and White Night.”

In 1990, Burton returned to Shreveport. It didn’t take long for him to notice that schools were putting less and less emphasis on music education. It confused him, so he formed the James Burton Foundation. Their mission is to “support music education for those in need through donated guitars and music lessons in schools, hospitals and community service organizations.”

The foundation raised funds to purchase and donate over 1,000 guitars to students and veterans. You can find out more by visiting JamesBurtonFoundation.org.

If that wasn’t enough to justify James Burton’s fame, let me share a few notes.

James is a member of the Rock and Roll Hall of Fame, Country Music Hall of Fame, Musicians Hall of Fame, Louisiana Hall of Fame and Red River District Walk of Stars.
He was a member of the famous “Wrecking Crew”.
It was part of a collaboration that won a Grammy Award for Best Country Instrumental Performance.
Rolling Stone magazine honored him as one of the most influential guitarists of all time – he is ranked in the top 20!
He is known as “the master of the telecaster”.
He invented a style of guitar playing called ‘Chickin’ Pickin ‘.
He was the first to put banjo strings on a guitar, allowing the player to dramatically change the pitch by bending the strings.
He won honors for his dobro work.
James Burton still owns all the guitars he bought.
Fender Guitar Company honored James as the first person to have a signature guitar made for him.
He appeared in Ricky Nelson’s â€œTraveling Manâ€ video, which was called the first music video.

Burton still travels extensively for appearances around the world. A few years ago I was in Memphis for ‘Elvis Week’. I was right next to James at Sun Records. The place is not that big and we were facing at least 150 people who wanted to get closer to James. It was the closest I’ve been to seeing what it’s like to be famous. This is not all it is meant to be. I understand why celebrities become recluses.

People from around the world come to have their pictures taken with the statue in honor of James that stands on Elvis Presley Avenue in front of the Shreveport Municipal Auditorium. The statue faces the headquarters of his Foundation, located just across the street!

If you’re lucky, you can enter the building and step onto the stage where James’ career began. So many careers began on The Louisiana Hayride, it became known as The Cradle of the Stars.

James Burton was born in Dubberly, Louisiana in 1939. You’d be hard pressed to find anyone more famous. And a personal note – James Burton is one of the nicest, most humble people you’ll ever meet. James and his wife Louise are proud conservative Christians.

As of this writing, they are in Nashville to put the finishing touches on “James Burton and Friends”, the sold-out show they taped last November. It will star James Burton and feature a few of his friends like Steve Cropper, John Carter Cash, Sammy Hagar, Johnny Owens, Albert Lee, Joe Walsh, Marty Haggard, Jason Scheff, Chris Whitehall, Alex, Roy, Jr and Wesley. Orbison, Micky Dolenz, The Imperials, Brian May and Paul Shaffer plus other surprise guests!

If you ask someone famous “Who is the most famous person you know?” Don’t be surprised when they say, James Burton, that guitarist from Dubberly, Louisiana!

Johnny Wessler offers historical musical tours and presentations of Northwest Louisiana. For more information contact him at: [email protected] or 318-393-3274