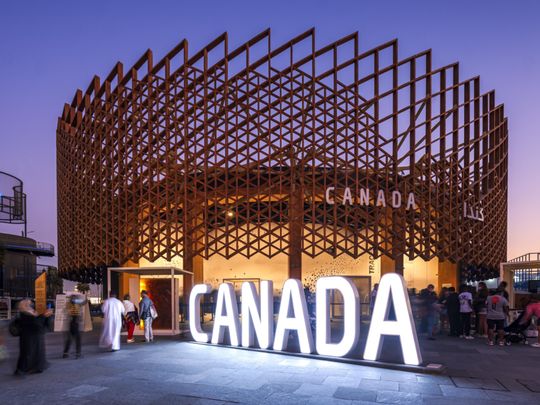 Dubai: The Canada Pavilion will mark its National Day at Expo 2020 Dubai on Saturday, March 19, with cultural and business events highlighting the economic, cultural and people-to-people ties between the United Arab Emirates and Canada.

According to organizers, Mary Simon, the Governor General of Canada, will lead Canada’s delegation to National Expo Day events and participate in a series of high-level meetings where she will promote leadership, innovation and opportunities in all sectors of society, while emphasizing the importance of collaboration across countries and cultures.

She will be joined by Mary Ng, Minister for International Trade, Export Promotion, Small Business and Economic Development, who will highlight the role that Expo 2020 Dubai has played in opening doors to more trade opportunities and bilateral investment agreements for the two countries.

It will be a week of music, art, film screenings and performances culminating with a National Day concert presented by Quebec pop sensation Marie Mai, whose electrifying beats have seen her build a massive fan base in Canada, France and the United States. His music incorporates elements of rock, pop and electro.

The internationally renowned circus troupe Artcirq will present their energetic acrobatics. Artcirq’s unique performance style blends modern circus techniques with Inuit culture and multimedia production, providing its members with the space, skills and opportunities to express themselves and celebrate their heritage.

The Canada pavilion will also feature an outdoor photography exhibit called “Take Your Seat,” where every shot reminds us to take care of each other, our planet and ourselves.

The Canada Pavilion will also participate in a series of fun events and activities to mark International Francophonie Day on March 20, a day when more than 300 million Francophones from five different continents celebrate the French language.

The Canada Day showcase will be complemented by the regional premiere of “Peace by Chocolate,” a Canadian drama film directed by Jonathan Keijser and inspired by the true story of the Hadhads. The Syrian family moved to Canada as refugees fleeing the Syrian Civil War, settled in Antigonish, Nova Scotia, and established the artisan chocolate factory Peace by Chocolate.