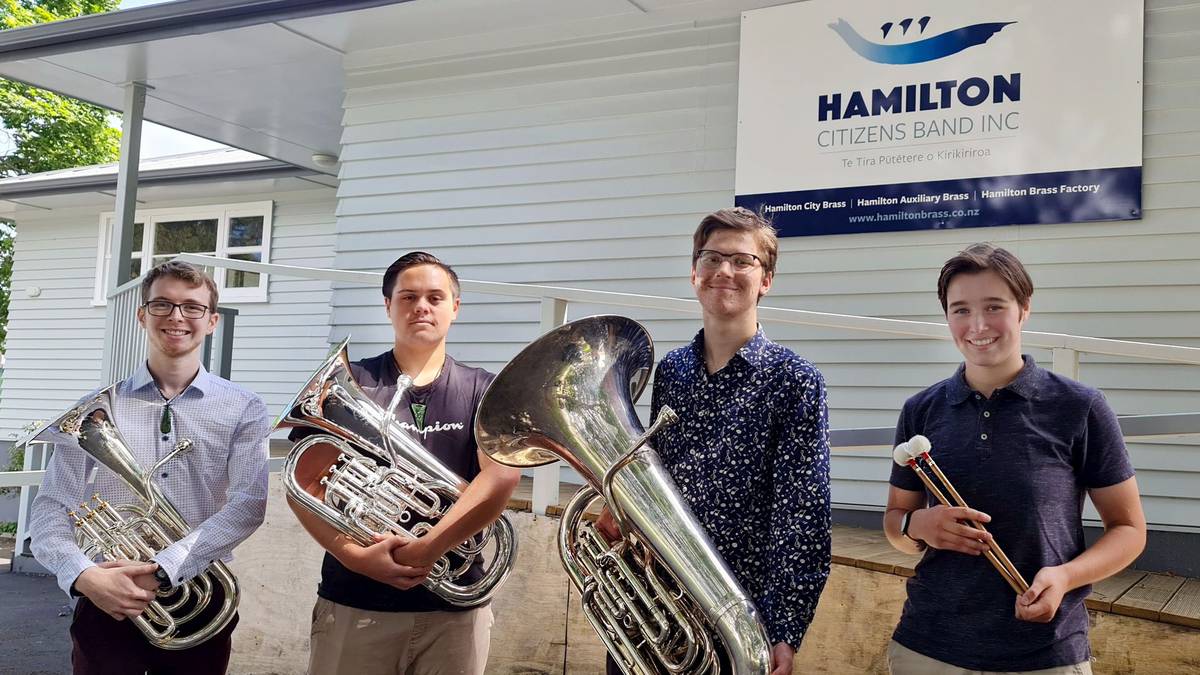 Four Hamilton City Brass members from Waikato have been shortlisted for the 2022 National Youth Band which will perform in Wellington later this month.

Ahead of their departure, their considerable talent can be heard at a small City Brass concert in Hamilton on Saturday afternoon.

Despite the challenges of last year’s lockdowns, young brass players from across the country auditioned for the 2022 National Youth Band. The four selected Waikato musicians are Simon Winship, Nat Garcia Gil, Leighton Ginever and Walter Hughes.

From January 16 to 23, the youth group, made up of New Zealand’s top brass and percussion musicians under the age of 23, will meet in Wellington, under the direction of Alan Spence and Tyme Marsters.

With three days of intensive rehearsals from a team of the best brass teachers from across the country, the youth group will present a series of indoor and outdoor concerts in Wellington to showcase the ability of these young stars, as well as the guest soloist. , Anthony Smith, the main horn of Woolston Brass, one of New Zealand’s finest brass bands.

Simon Winship, who plays baritone for Hamilton City Brass, was chosen as second baritone. Apart from music, Simon will be starting a Master of Science in Honey Chemistry at the University of Waikato. This will be his fourth youth group and he can’t wait to see friends and play at the highest level of brass bands in New Zealand.

Coming from a musical family, Walter Hughes plays the euphonium for Hamilton City Brass and was selected as the second euphonium for the Youth Band. Walter is the current New Zealand Junior Euphonium Champion.

This is his second youth group and he is excited to meet new people and practice stimulating music with the group. Next year he will be in grade 12 at Fraser High School in Hamilton.

The National Youth Band 2022 will be Leighton Ginever’s first time at this national level. Living in Morrinsville and playing Eb bass in Hamilton City Brass, Leighton is the National Junior Bass Champion. He says playing in this band will challenge him, allow him to experience new music and meet new people.

Next year, he will begin a Bachelor of Music, double major in composition and mathematics at the University of Waikato.

Hamilton City Brass lead percussionist Nat Garcia Gil makes his debut in next year’s youth group. They are eager to expand their skills as a percussionist and make new friends. In addition to auditioning for the Royal New Zealand Navy Band, they will undertake a Bachelor of Science, double major in Ecology, Biodiversity and Statistics at the University of Waikato.

In order to raise funds for these four musicians who will be heading to Wellington, they will organize a small concert featuring a variety of solos and ensembles, showcasing their considerable talent. Other members of Hamilton City Brass will also be in attendance. Everyone is welcome to support these musicians and enjoy an afternoon of great music.