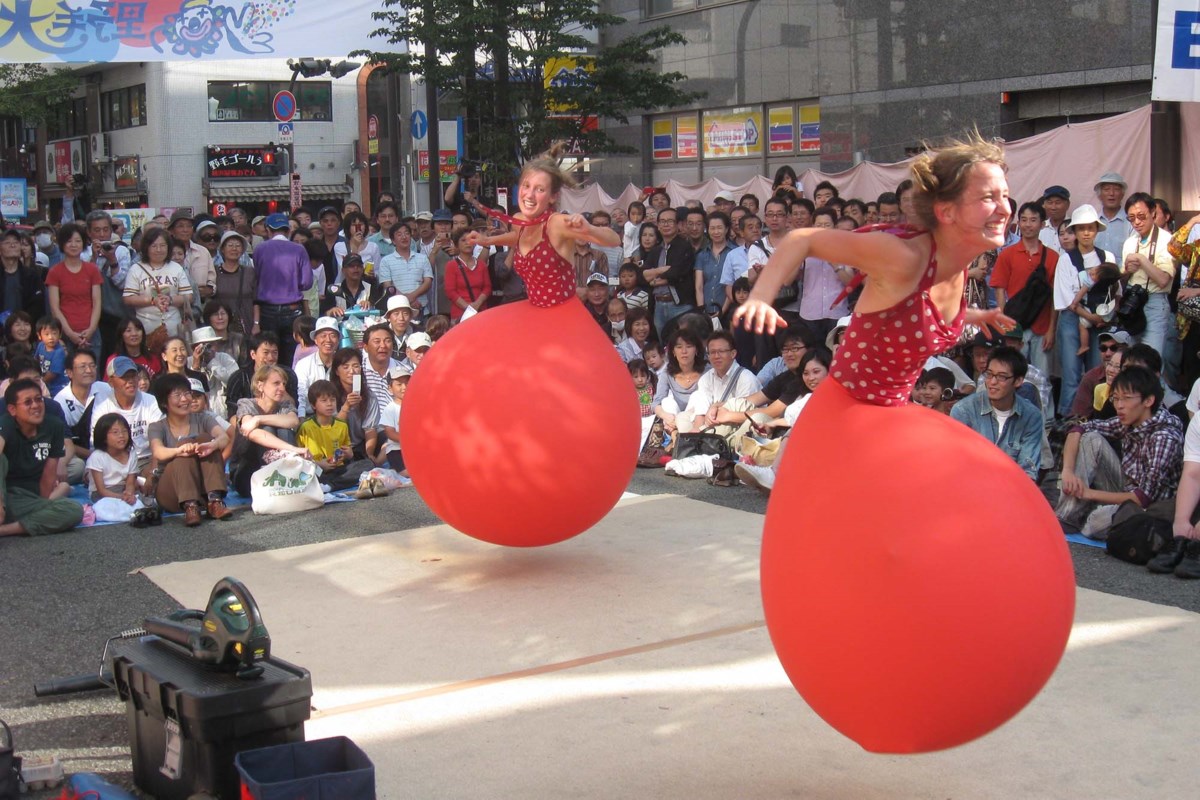 The Kif-Kif Sisters debut at the International Festival of Children’s Arts with Jam Side Up, a mix of physical comedy, circus, music and street theater.

Françoise and Josette Lépine, identical twins from Quebec, each obtained a master’s degree in theoretical physics in 2009. However, the love of the street and the clown captured their hearts.

They have turned around and the duo will perform at the International Festival of Children’s Arts from June 2-5.

The Kif-Kif Sisters, who bounce on balloons, have toured both sides of the Pacific Ocean. With 15 years of experience in their toolbox, the sisters have developed Jam Upa proven mix of physical comedy, circus, music and street theatre.

Throughout the 45-minute show, the trained acrobats juggle umbrellas, fight giant pink monsters and pop fries at breakneck speed. And everything is done with simple household gadgets.

“We love humor. We love saturated colors and we love joy. Everyone should have access to joy, especially parents and children. Everyone can enjoy this show and it binds families,” said Lépine.

Lepine said the twins have done everything in life together. As youngsters, they even shared a secret code. As an adult, developing a theatrical partnership was a given.

“We like to do everything together. We make the costumes, the sets, the play. When you keep it small and do it all, it’s easy to put your personal stamp on a show. And we have a lot of imagination.

Although the Lepine sisters’ parents are both scientists, the couple insisted that their daughters have a broad understanding of fine art and art history. An accomplished multidisciplinary artist, Françoise is a graduate of the Rimouski Music Conservatory in cello. Josette also studied piano at the conservatory and later learned to play the accordion.

While working on their formal studies, the curious sisters took a break and traveled to South America.

“We juggled in the streets for fun and met other people clowning around. They took us to clown lessons and we realized there was an amazing world there. We took clown lessons, created a website and started getting invitations to perform. Within three years, we were on tour. In street performances, you can put your personality into it, and there are endless worlds you can create.

The zany acrobats have performed at the Noge Daidogei street festival in Japan, traveled to entertain Argentinian children and performed 10 times at children’s festivals in Mexico, in addition to sharing their clownish vision of the world across North America. North.

After 15 years in the trenches, the sisters continue to develop new concepts while tweaking older shows.

“When you’re passionate about something, you feel like you have to do it. We perform to so many audiences from different cultures, and we meet so many different artists on tour. We’ve developed our identity. Art is like a language, and we have developed our own language. We continue to play as children and as sisters, we come to be together.

Jam Up is a show for all ages and will be presented at the Alberta Blue Cross tent in Millennium Park. Tickets are $13 plus fees. Visit www.stalbert.ca/exp/childfest/ or call the Arden box office at 780-459-1542.