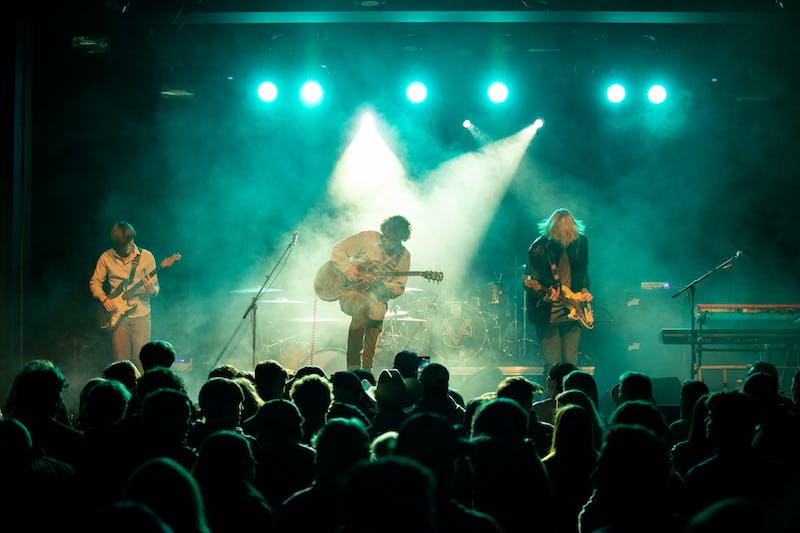 If you know anything about the Auburn music scene, The Stews is probably a household name. However, they are currently taking their music to the next level by playing on a full-scale tour with fellow Auburn native band, The Vegabonds.

Consisting of Preston Hall on vocals and guitar, Wyatt Griffith on drums, Bennett Baugus on bass and Blake Dobbs on guitar, The Stews are a local band that play rock music of all kinds.

The band released their debut EP on April 14, 2021. It features five of the band’s singles and has received hundreds of thousands of plays on Spotify.

Playing around 50 shows with The Vegabonds, plus several one-off performances, The Stews have a busy schedule for the next few months. The tour began in Raleigh, North Carolina in mid-December, they will continue to play regularly until May 29 at the Rooster Walk in Martinsville, Virginia.

But for a group to have reached this level, one wonders where it started. Blake Dobbs told how the four met and how the group was created.

“Bennett, Wyatt and I met in high school, and I got to hang out with them and play and it became a band thing,” Dobbs said. “We played all through high school, and they (Bennett and Wyatt) went to college and we all went down different paths.”

Dobbs, being a year younger than his bandmates, was unable to leave with his bandmates immediately after graduating from high school. However, Wyatt became acquainted with Preston Hall while at college, which would soon help form a new band.

Get The Plainsman straight to your inbox.

“Wyatt introduced Bennett and me to Preston over winter break. Then Bennett decided to transfer to Auburn and I graduated from high school and took a year off and then everyone was in Auburn and we are there now,” Dobbs said.

After forming the band, they began playing locally throughout Auburn and expanded into music festivals throughout the Southeast.

On their debut EP, the band described their music as a hard rock compilation. However, over time they incorporated softer rock and even beach rock into their sets.

The group gave a preview of their future musical projects.

“I think our next release is going to be a little different, but what excites me is the fact that it has similar songs to the EP, and it has a ton of songs that are right there- low and really different,” Baugus said.

Although they consider themselves to be very rock-centric, they are also inclined to switch things up and say that their songwriting is not tied to any genre.

“I don’t think anything will stop us from starting to branch out,” Griffith said of the band’s style future.

In the future, they aspire to play as long and as much as possible. They want to move up the ranks and start playing in bigger and better venues. Their main goal is to build connections wherever they play and reach as many people as possible with their music through any medium that will get the job done.

The band gave a collective response when asked where they hoped their music would take them.

Do you like this story? The Plainsman does not accept money from tuition or registration fees, and we do not charge subscription fees. But you can donate to support The Plainsman.