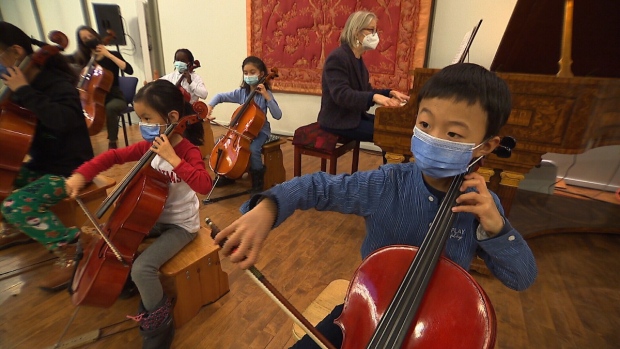 Young Montreal cellists receive help from a group of professional musicians who volunteer their time to teach the next generation.

Children meet for group and individual lessons at a local church once a week, with donations helping pay for the instruments, while members of the Montreal Symphony Orchestra volunteer as teachers.

A student tells CTV National News that she imagines herself playing a concert.

Another says she has been playing the cello for a year and three months and loves to train an hour and a half a day.

“For me when I first saw it I thought it was easy to play,” she said. “But when I tried it, it’s so hard to pluck the strings.”

Although he doesn’t have a musical background himself, a father says that like all parents, he tries to help his son practice at home.

“So I see the progress he’s making every day so it’s really amazing,” he said.

The Montreal Cello Ensemble chooses its students based on talent, dedication and love of music.

For Geneviève Guimond, cellist with the Orchester symphonique de Montréal, music has been part of her life since she was five years old.

But while it has been an “incredibly rewarding and valuable experience,” she knows it is also “too expensive most of the time.”

“A lot of families find it very difficult to buy the instruments and the instruction and everything that goes into music education including my family was a big sacrifice,” Guimond told CTV National. News.

She says that in the two decades between her early cello playing and her entry into the Orchester symphonique de Montréal, she had many very influential teachers who insisted on teaching her for free.

“By the generosity of their hearts, they went above and beyond to help me achieve my goals,” she said.