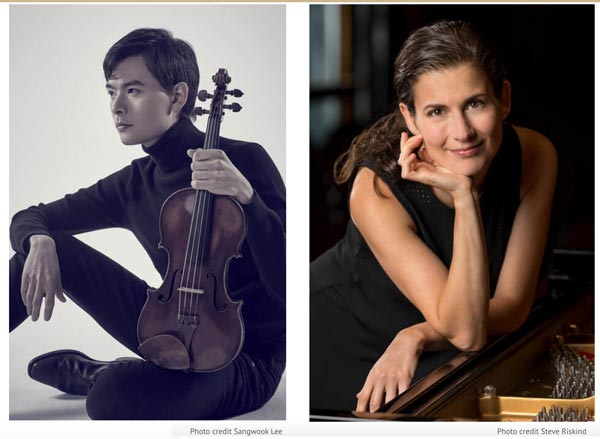 (SEWELL, New Jersey) – Music at Bunker Hill features violinist Stefan Jackiw and pianist Anna Polonsky in recital on Sunday, November 28 at 3:00 p.m. in Sewell, New Jersey. Jackiw plays with Polonsky after a busy fall season. He has performed solo with the Boston Philharmonic in Prokofiev’s Violin Concerto, played Brahms’s Violin Concerto with the Columbus Symphony, and premiered Conrad Tao’s new Violin Concerto in Atlanta and Baltimore. Mr. Jackiw embraces the recital format on November 28 with Bach and Brahms sonatas and the Lutoslawski Partita for violin and piano.

Steinway artist Anna Polonsky joins Mr. Jackiw in these three equally virtuoso works for violin and piano. Ms. Polonsky is in great demand as a soloist and chamber musician. Music at Bunker Hill is happy to welcome him back on stage.

The concert will be held at the Bunker Hill Presbyterian Church at 330 Greentree Road, Sewell, New Jersey. Tickets are $ 12 for students and $ 28 for adults / seniors. Tickets are available for purchase in line. In accordance with safety guidelines, capacity has been capped at 50%, and proof of vaccine and mask will be required. A livestream for ticket holders will be available for one week after each concert.

Stefan Jackiw is one of America’s greatest violinists, captivating audiences with a playing that combines poetry and purity with impeccable technique. Hailed for playing an “unusual musical substance” that “stood out for his intelligence and sensitivity” (Boston Globe), Jackiw has appeared as a soloist with the Boston, Chicago, Cleveland, New York, Philadelphia and San Symphony orchestras. Francisco, among others.

In the summer of 2021, Jackiw returned to the Cleveland Orchestra to perform Prokofiev 2 with Rafael Payare, the Boston Symphony performing Concerto no. 5 with Alan Gilbert, and the Aspen Music Festival performing Beethoven’s Triple Concerto, alongside Alisa Weilerstein and Inon Barnatan. During the 2021-2022 season, he will perform a new Conrad Tao violin concerto with the Atlanta Symphony and the Baltimore Symphony; he will also return to the Indianapolis Symphony to perform the Korngold Concerto, and to the Oregon Symphony with the Schumann Concerto. In Europe, he will perform with the NDR Elbphilharmonie Orchestra and Alan Gilbert, and with the Orchester National de Lyon under the direction of Nikolaj Znaider.

Advertise with New Jersey Stage for $ 50 to $ 100 per month, click here for more information

Before the outbreak of COVID-19, Jackiw was scheduled to perform with the Los Angeles Philharmonic, the Philadelphia Orchestra, the Vancouver Symphony, the Konzerthausorchester Berlin, the Oslo Philharmonic, the Royal Scottish National Orchestra, and the Antwerp Symphony, among others. He has also recently performed with the Helsinki Philharmonic Orchestra, the Bournemouth Symphony, RTE Dublin, and the Baltimore and San Diego Symphonies. In July 2020, he launched Stefan’s Sessions, a series of virtual masterclasses exploring major works with emerging violinists. This free online series has reached thousands of viewers.

Jackiw tours frequently with his musical partners, pianist Conrad Tao and cellist Jay Campbell, as part of the Junction Trio. He also enjoys collaborating with pianist Jeremy Denk with whom he shot the complete Ives violin sonatas, which the duo recorded for a future release on Nonesuch Records. He has also recently recorded Beethoven’s Triple Concerto with Inon Barnatan, Alisa Weilerstein, Alan Gilbert and the St. Martin in the Fields Academy.

Born to physicist parents of Korean and German descent, Stefan Jackiw began playing the violin at the age of four. Her teachers have included Zinaida Gilels, MichÃ¨le Auclair, and Donald Weilerstein. He holds a Bachelor of Arts degree from Harvard University, an Artist’s Diploma from the New England Conservatory and is the recipient of a prestigious Avery Fisher Career Fellowship. Jackiw plays a violin made in 1750 in Milan by GB Guadagnini, generously on loan from a private collection. He lives in New York.

Anna polonski is in great demand as a soloist and chamber musician. She has performed with the Moscow Virtuosi, the Buffalo Philharmonic, the Saint Paul Chamber Orchestra, the Columbus Symphony Orchestra, the Memphis Symphony, the Chamber Orchestra of Philadelphia, the St. Luke’s Chamber Ensemble and many others. Ms. Polonsky has collaborated with the Guarneri, Orion, Daedalus and Shanghai quartets, as well as with musicians such as Mitsuko Uchida, Yo-Yo Ma, David Shifrin, Richard Goode, Emanuel Ax, Arnold Steinhardt, Peter Wiley and Jaime Laredo.

Anna Polonsky made her solo piano debut at the age of seven at the Special Central Music School in Moscow, Russia. She immigrated to the United States in 1990 and attended high school at the Interlochen Arts Academy in Michigan. She received her Bachelor of Music from the Curtis Institute of Music under the tutelage of renowned pianist Peter Serkin, and continued her studies with Jerome Lowenthal, earning her Masters from the Juilliard School. In addition to performing, she is part of the piano faculty at Vassar College and, in the summer, the chamber music festivals of Marlboro and Kneisel Hall.

This program is made possible by funds from the New Jersey State Council on the Arts, a partner agency of the National Endowment for the Arts and the Gloucester County Cultural and Heritage Commission.

Founded in 2008, Music at Bunker Hill brings great performers to the heart of southern New Jersey, enhancing the cultural life of our community by preserving the tradition of classical music while exploring other musical genres. With outreach concerts in schools and libraries, our artists inspire the next generation with their passion for the arts and their standards of excellence. Our goal is to make great music affordable, accessible and engaging for as many people as possible.