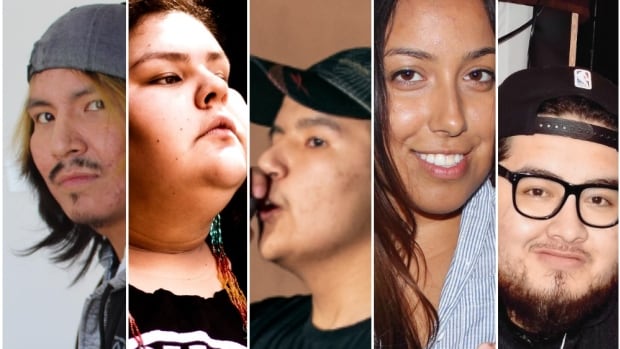 A group of artists from the Cree Nation of northern Quebec are set to be part of a showcase during Canadian Music Week, the largest entertainment gathering in the country.

It’s happening this week in Toronto.

Canadian Music Week runs until June 11 and brings together artists, producers and professionals from the entertainment industry. It is a combination of conferences, a trade show, an awards show and a four-day, 40-site new music festival, showcasing talent from across the country. It is the largest annual entertainment event in the country.

Fourteen Indigenous artists who are part of the N’we Jinan ArtWorks program at inPath will perform at a showcase during Canadian Music Week on June 9 at The Painted Lady, 218 Ossington Ave in Toronto.

inPath is a Canadian non-profit organization that aims to create a network for Indigenous youth and artists through arts-based learning, professional training and mentorship.

Below are their thoughts on participating in Canadian Music Week, connecting with other Indigenous creators, the healing power of music, discovering their authentic voice, and their goals as an artist.

CJAY GriZ (Christian Moonias), 31, is an Oji-Cree originally from northern Manitoba, but living in the Cree community of Chisasibi in northern Quebec.

CJAY has been a music producer/songwriter since he was a teenager and first got work as an artist through the N’we Jinan program. His styles range from hip-hop and trap to R&B and pop music.

“What I want to be able to do in the future is help more kids. And maybe have my own workshops and I also want to start a studio in Chisasibi so people can own their art. A place where people can rehearse, practice, do and record,” he said.

“I think it’s very necessary in this community. We need a facility where we can own our own culture and craftsmanship. It’s going to be exciting for all of us to come together [at Canadian Music Week]. That energy is going to be what we need to put on a really good show.”

Siibii (Angel Baribeau), 21, is a queer, non-binary recycled singer-songwriter and artist from the Cree Nation of Mistissini in northern Quebec.

Their debut solo album “For those I love (d)” reached the top 3 on the Apple Music Pop Canada charts. Their second single “Wish We Were Older” reached number 1 on NCI FM National Indigenous Music Countdown on SiriusXM Canada. Siibii will have a second showcase on June 8 at Cameron House in Toronto for winning the RBC Emerging Musician Award from Canada’s Walk of Fame in 2021.

“(Changing my stage name to Siibii) is part of reclaiming my identity and finding myself that is ongoing. I was raised by someone who told me to always be proud to be Québécois, but I’m mostly Eenou. So I carried that name, but it doesn’t have the same meaning for me as it does for my father, for example,” they said.

“But having a name (Siibii) that reflects where I’m from and who I am, I think makes a lot more sense. I’m really excited to step into this new era of Siibii performances. Even just representing Eeyou Istchee (Cree territory in Quebec) I want people to say ‘hey, Siibii, that’s a word I know… it’s river!'”

Vangorian (Franklin Moar), 24, is a Cree producer and DJ from the Cree Nation of Chisasibi in northern Quebec. An entirely self-taught artist, Vangorian is known for his signature synth, melodic pop beats and heavy remixes that transcend the worlds of dance and electronic music.

“For a lot of young people, there’s a lot of difficult things that they go through, alcohol, drugs. They’re eaten up by those things in their life, they find it hard to move on with that. For me, I try to take care of myself every day. I don’t drink, I don’t smoke either. I like this practice, this way of life and I don’t want to do things that are not good for me , even when it gets hard sometimes, when you fall into that,” Vangorian said.

Jossée Bernier, 27, is a self-taught multidisciplinary artist from the Cree Nation of Oujé-Bougoumou in northern Quebec.

Although her primary artistic practice includes painting and singing, she naturally connects to multiple forms of creative expression, including graphic design, photography, and the traditional Cree practice of embroidery and sewing.

“I want to thank inPath and the Emerging Artists Program for being such a cool space, outlet, and network of artists…for really inspiring me to honor the artist that I am. It took me a long time to creatively discover where I wanted to go, and what I saw myself doing and even what I was capable of doing,” she said.

“Over the past two years that I’ve been on the program, I feel like I’ve been able to focus on the kind of artist I am and what I want to create and how that relates to my goal. It’s important to me that everything I do in life comes from that goal.”

SLICE (Silas Katapatuk), 29, is an emerging Cree hip-hop artist and producer from the Wemindji First Nation in northern Quebec. His sound is a smooth mix of pop, trap, rock and everything in between, built on a foundation of guitar and bass.

His lyrics are in both Cree and English, a faithful reflection of his commitment to revitalizing his ancestral language. In 2014, SLICE was featured on N’we Jinan’s Vol. 1 album that reached number 1 on iTunes.

“I have organized hip-hop workshops and songwriting and beat-making workshops in other communities in Eeyou Istchee. [At Canadian Music Week] I would love to network and meet new people in the industry, like producers and managers,” he said.

“It helps you grow as a musician, artist or whatever you’re trying to do in the music industry. And during CNW (Canadian Music Week) is a big event that a lot of producers and people in the industry will be present.”