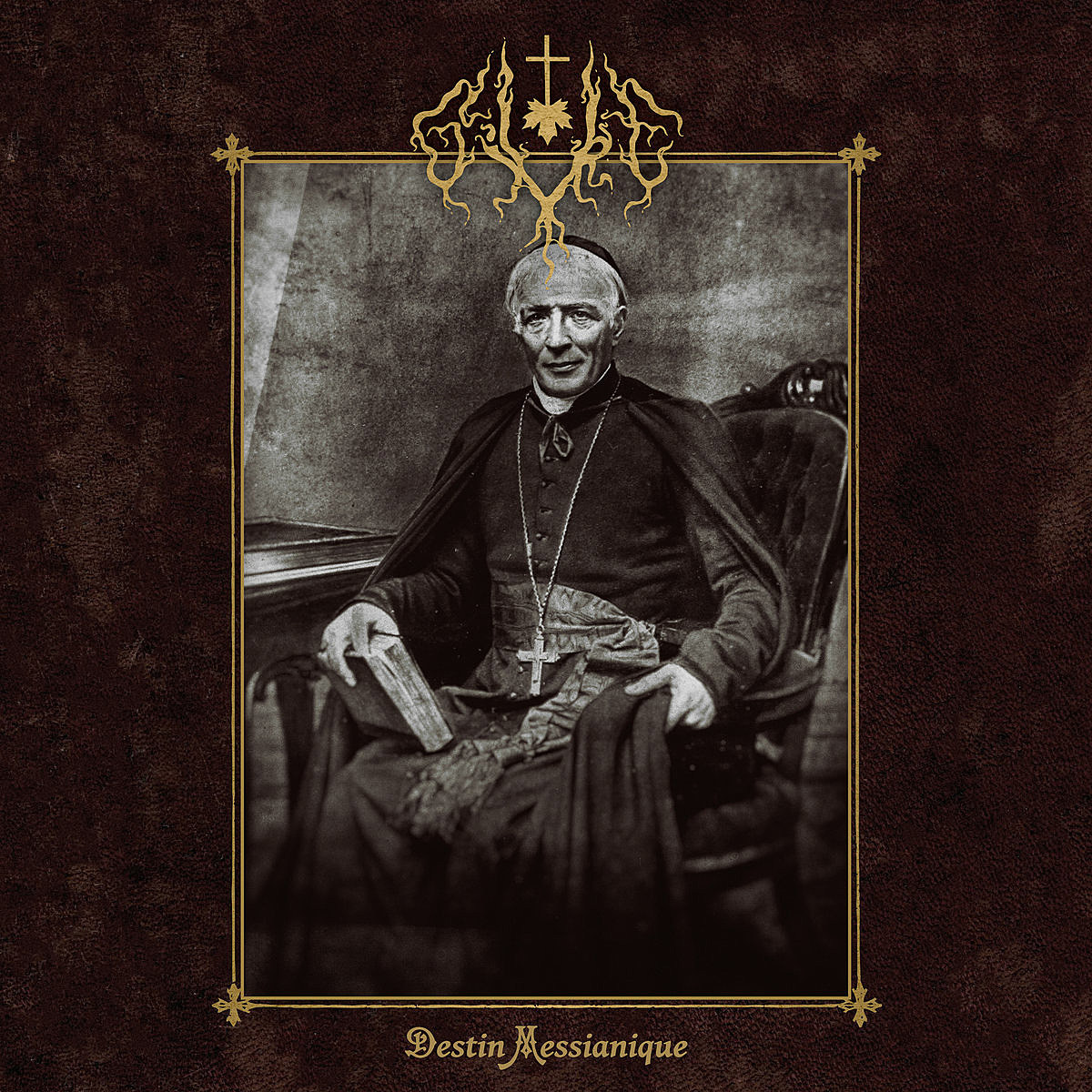 The last time I covered a Quebec black metal band Give my references to religious music shouldn’t be enough to indicate that the band’s themes are largely religious, but not in the usual devotional or blasphemous way. In an approach of historian and orator, the new album of Givre Messianic Destiny tells the story of Catholicism in rural Quebec, full of tales, songs and poems of extreme devotion through pain and an ascetic lifestyle. Frost’s music, therefore, is just as miserable, but without the silver lining that devotional music typically carries, which makes sense since Frost, themselves, are just storytellers instead of worshippers.

Now using a much darker sound completely different from the worship and art music that fueled The Mystical Press, Messianic DestinyThe more aggressive and traditionally melodic music depicts Catholicism as it was in their home province. Telling extreme and poor faith through tillage, among many other stories, Messianic Destiny portrays religion as something sinister, a hold on society, simply showing it for what it is. To listen Messianic Destiny in its entirety and read an interview with Frost below.

I understand that this album involves your region’s interaction with religion. What does religion, in particular Catholicism, mean to you and what made you want to make an album on local Catholic history?

David Caron-Proulx: We were all brought up in Catholic school without really understanding religion. The project therefore reflects historical research on the subject. We approach the subject with a critical spirit but with the intention of showing that there is still richness and poetry in the texts that we have chosen as lyrics.

Do you think there is beauty in this type of religion? Or are you trying to represent it in a different way?

DCP: I think it’s obvious that Christian art aims for beauty, which is why so many people visit churches and cathedrals without even being religious. But our effort with this album is to try to show how people here thought in Quebec in the early 1900s. Religion was then omnipresent and really pushed people to live simple lives, centered on the land, the family and faith.

Frost’s lyrics are only direct quotes. We believe that the selection of texts gives a sufficient image of what we want to represent. It is above all: a deep indoctrination of the nation and a true poetry that makes its way through these dark times.

For example, in “The Plowman”, we sample an old song that reflects the theme of the album well:

But the group does not aim to show “beauty in religion”. For example, in the next album (which is mostly finished), we mainly focus on the lives of demented saints…

How to find these texts that highlight asceticism and devotion?

DCP: Above all a fascination for the history of ideas. Jean-Lou is a historian by profession, he spends hours looking for old books that look as boring as possible and reads them all.

Jean-Lou David: I scour the written heritage for things that instantly seem to come from a certain era, with an outdated flavor, and roots in beliefs that are long gone and difficult to understand today.

How does it feel to communicate these spiritual anachronisms?

DCP: The goal is not to maintain a nostalgia for this era, it is rather to try to immerse people in it with the least possible a priori, to make them feel if possible the state of mind of an era, its doubts, its contractions and its beauty

But I would say that my goal is to create songs that I find good and pleasant to play, while trying to stick to the ideas.

So are “spiritual anachronisms” well communicated? I do not know. But the songs are really fun to play!

How do you maintain this omniscient separation with such a devotional subject?

DCP: Simply, we present literary or sound material from another time. Without criticism, praise or comment. I think we all have our way of handling the matter, some of us being more spiritual than others.

By telling these stories, did you learn anything new about the religion or gain insight into the practices around it that you may not have known before?

There is a recurring image, a metaphor, of suffering being the tool that God uses to make souls more fertile while laborers till the ground. I think this type of fractal symbolism is very striking. Here is another (mistranslated) example:

The most surprising findings are those around self-inflicted pain. There was a time when ascetics did atrocious things to each other, to very extreme degrees. This is the case of a certain Louise du Néant (literally Louise du Vide), a 17th century French mystic known to be extremely pathological in her way of humiliating and torturing herself. Reading historical facts about such an extremity is, in my opinion, far more disturbing than any death metal/goregrind talk you can find.

Is there anything unique about the historical Catholicism where you come from that might not be immediately known to people living elsewhere?

DCP: Few people know it but Quebec was, until the turn of the 1960s, something like a theocracy. Withdrawn into a conservative and agronomic national identity, the provincial elites are obsessed with the idea that Quebec must remain predominantly Catholic to preserve its identity. In direct contradiction to the industrial and political modernity that is taking hold everywhere in the West, the Quebec of the Great Darkness sees itself as the last bastion of resistance for Roman Catholicism in North America. Moreover, the religious of the time suggest that Quebec is invested with a true mission of evangelization of the continent, a “Messianic Destiny”.

When it comes to composition, are there any characteristics you want to encounter when expressing these ideas? That is, are there any specific moods you have in mind when considering these writings?

DCP: I think for this album I was looking for an epic but melancholic sound. But it depends, some songs are just stylistic exercises. As the fifth song on the album is kind of a joke, really not the kind of song I’m used to writing. But the point was to take that pre-existing religious melody and try to fit it into the flow of the album, which in the end I think works out well.

Is there anything you would like to say about Messianic Destiny or Frost as a whole?

DCP: When we started making music at the beginning of 2021, we made three albums in quick succession, the second being Messianic Destiny and we are about to finish mixing the third album. We also started a live version of the band and did a few gigs, which led to some new songs that haven’t been recorded in a “live” setting yet. So just know that we have a lot of music to come!