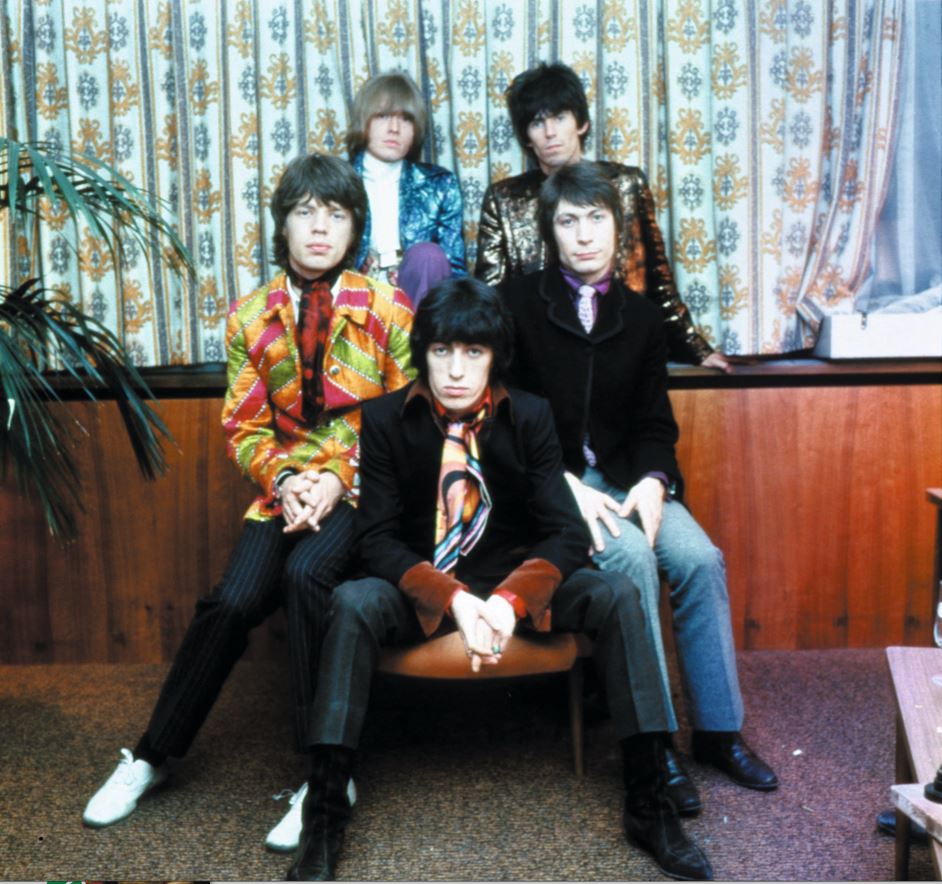 Richmond Publishers Aurora Subway Books / Supernova has released a new book of rock and pop photographs of Swingin’ London in the 60s and 70s.

Many “icons” such as the rolling stones and the Who came from West London and made a name for themselves playing clubs in Richmond, Teddington and Ealing, and Pop Rock Icons; Swingin’ 60s and 70s in London has photos of them rehearsing, chilling, being themselves as well as the set publicity images released to promote their tours and albums.

The book begins with the Rocks and the Beatles and made its way through the London of mods and the anglification of R&B to the eras of progressive rock, heavy metal, pub rock and glam rock.

The Chiswick Calendar spoke to rock and pop journalist David Sinclair, who wrote the foreword to the book.

“A fantastic snapshot of the era”

“Philippe Margotin has put together a fantastic snapshot of that time,” he says. “The book is a celebration of 60 years since the great explosion of Rhythm and Blues and it has brought together images from all over.”

Philippe Margotin has already written a rock and pop book series: Beatles, Dylan, Rolling Stones, Pink Floyd, Led Zeppelin, Hendrix, Springsteen which have been translated from his native French into English, German, Spanish, Italian, Dutch and Chinese and have sold over 600,000 copies worldwide.

David Sinclair was a musician since the 1970s and a music journalist since the 1980s. As chief rock & pop correspondent for The temperature and a contributor to Rolling Stone, billboard, Q magazine and many others, he has seen and met many of the groups featured in the book.

“What people forget about pop music in the UK in the early 1960s was the extraordinary effort it took to hear it,” he says in the book.

“You might come across a Chuck Berry track on the BBC’s children’s radio show Saturday club or see Researchers on the only TV music show Thank your lucky stars. Otherwise, it was a matter of listening to Radio Luxembourg, where the songs were deliberately muted by the DJ before the end.

“If you managed to hear a song you liked, you had to rush out and buy the record to make sure you never heard it again.”

A “Big Bang in the world of gray cultural conformity”

The arrival of Beatles and the rolling stones onstage sparked a “Big Bang” in this world of “gray cultural conformity” that still resonates today.

Although the origins of R&B are American, it was the British groups that revolutionized the music, fashion and culture that accompanied rock and pop.

“The Americans were almost embarrassed by the Blues,” he said. “They weren’t celebrating it. Eric Clapton, Jeff Beck, The Kinks put a British twist on it and the Americans were quite impressed. They called it “the British invasion”.

The first time the Beatles and the rolling stones met 14 April 1963 at the Station Hotel in Richmond.

David frequented venues such as the Half Moon in Putney, the Crawdaddy Club, which opened in 1963 and moved to the Richmond Athletic Grounds, and the hotel on Eel Pie Island which burned down in 1971, both as a bettor and a musician.

“These days, music is everywhere,” he writes. “You can download virtually any song you want to hear almost anytime from just about anywhere on the planet. It’s part of the cultural air we all breathe.

“Yet with so much to choose from, the catalogs of the stars who began their journey from these islands in the 1960s and 1970s remain the benchmark by which contemporary pop and rock music is still judged.”

As Judith Simons wrote in Daily Express at the time, the photographs Rocks were sure to upset the generation of war and were like a wake-up call for young people:

“They look like boys any self-respecting mum would lock in the bathroom. But the Rolling Stones, five tough young London-based music makers with outgoing mouths, pale cheeks and shaggy hair don’t care what mums think!

It was the wrong thing to do to smile at the camera. It was insolent, provocative. “Would you let your sister go out with a Rolling Stone? asked melody maker in 1964. Growing up in Bristol, I remember boys from Bristol Grammar School being suspended just for going to see them. (They may have dropped out of school to do it. Maybe that’s what suspended them, come to think of it).

Their manager Andrew Loog Oldham did his best, and very effectively, to distance them from the pared down image of Beatles. There are two images of groups at a golf club. While the Beatles seem to be having a business meeting on the ties, the Stones look like they could do some serious damage to someone with the clubs.

“If you’re going to kick authority in the teeth,” Keith Richards said, “you might as well use both feet.”

The Beatles quickly abandoned the boy-next-door look around 1950 and with characteristic arrogance John Lennon said:

“We are more popular than Jesus now; I don’t know which will come first – rock ‘n’ roll or Christianity.

At the same time the group of John Mayall BluesbreakersEric Clapton, Joe Cocker, the Native Americans (whose line-up included three of the greatest guitar “heroes” in rock history: Eric Clapton, Jeff Beck and Jimmy Page), as well as bands such as The Animals and Manfred Man were working hard to revitalize R&B.

Alexis Corner was one of the very first to introduce the Blues to British audiences at the Ealing Jazz Club, which features in another book recently published by Aurora Metro: Rock’s Diamond Year.

Pop Rock Icons; Swingin’ 60s and 70s in London has a curious photo of the Animals, with short hair, all wearing suits and ties, in which it seems that great effort has been made to coordinate the colors of their shirts with the color of the painted wall behind them, but the angle of the photograph seems to indicate that the photographer is more interested in the styrofoam tiles on the ceiling then they are on the tape. Maybe that was considered cool.

The Spencer Davis group look more natural draped over a red mini and wearing silly hats, reminiscent of many student photographs of the time and there’s a fabulous shot of Rod Stewart before he entered the shaggy mullet phase of brand, in which her hair is positively bouffant.

I loved reading this book and looking at the pictures. That didn’t tell me anything I didn’t already know, but that’s not the point.

Coming from Bristol, I missed the laid-back familiarity of London clubs, having to watch the best bands in bigger venues like Colston Hall, but the fashions bring back a lot of fond memories.

I had a purple felt slouch hat like the one Roger Daltrey wore in one of the publicity photos for the 1968 album. Magic Bus: The Who on Tour (although I should point out that I acquired mine ten years later, probably (unknowingly) because Roger Daltrey wore one on that tour). I remember crocheting something that looked a lot like a dress Sandie Shaw is wearing in one of the other photos.

When I was a teenager top pops was well established and the NME, a must-read, had become Britain’s best-selling music newspaper. Cream, Procul Harum, King Crimson, Cat Stevens, Genesisall the bands we saw at Colston Hall are featured in the book.

I was very upset to be left out when a “friend” got tickets to what was billed as Bowie’s “last” tour in the late 70s and left me out, but I saw Eric Clapton, Emmerson Lake and Palmerthe Moody Blues, Led Zeppelin, Pink Floyd, Jethro Tull and my favorite band Yesalso in the book.

“I spent a day with David Bowie,” David Sinclair tells me, doing nothing to ease my feelings of resentment. We went to Trident studios in Soho where he recorded Ziggy Stardust and the phone booth he used for the album’s back cover. We had a great day.

AC DC were fun, he recalls. Malcolm and Angus Yaris were “hilarious”, while his fondest memories date back to a few days spent with the Stones in 1995 or 1996 in Toronto.

“I did a terrible interview with Prince in New York. It was a contractual obligation for him to do it but he wouldn’t and he wouldn’t let me record it. He gave me monosyllabic answers or said either “it’s too personal” or “I don’t want to talk about it” to pretty much everything I asked.

“He had a surprisingly deep voice and a strong handshake. I spent three days following him.

Everyone has fond memories of the bands they followed in their youth, because I guess we were young and they played a big role in those years. The book is for “all those who missed” this era of British rock & pop, says David Sinclair, “and all those who were there and who want to remember”.

The book launches with a bus tour of some of the groups’ former haunts in west London on Sunday 20 November, hosted by Paul Endacott. Tickets: 60sbus.london.

Copies of the book are available for purchase online here: aurorametro.com

See also: Antonio Forcione on tour, this week’s concert in Chiswick and Trova – the singer-songwriters of Cuba

See all the latest stories: Chiswick Calendar News and Features

The Chiswick Calendar CIC is a community resource. Please support us by buying the equivalent of a monthly cup of coffee (or more, if you insist). Click on here to support us.

We publish a weekly newsletter and update the website daily with local news and information. We are editorially independent.

To subscribe to the weekly newsletter, go to here.