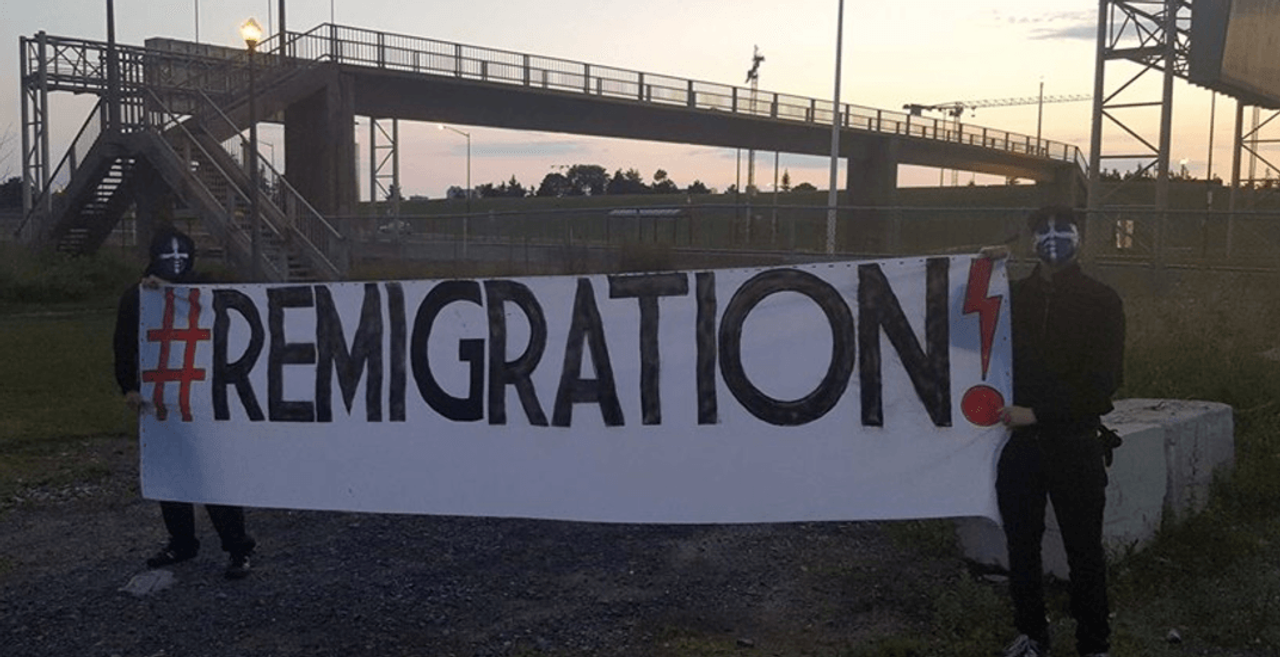 Raphaël Lévesque, a notorious Quebec neo-Nazi and founder of the far-right group Atalante, was found guilty of breaking and entering by a three-judge panel of the Quebec Court of Appeal. Last month’s decision overturns his acquittal by a lower court in June 2020.

Lévesque’s break and enter conviction stems from a threatening provocation he organized and carried out on May 23, 2018, at the offices of Vice, a print magazine and website focusing on arts, culture and current affairs. The case will now be sent to the Court of Quebec, which will hold a hearing to determine Lévesque’s sentence.

Lévesque formed Atalante in 2015 under the pretext of fighting Quebec’s “migratory subversion”. In particular, the group has targeted immigrants and refugees fleeing the misery, violence and destruction wrought in their home countries by US imperialism, with the full complicity of Canada.

Atalante is inspired by European fascist writers who advocate the xenophobic and Islamophobic theory of the “great replacement” of European peoples by immigrants. The members of Atalante are neo-Nazis who virulently oppose immigration and advocate “remigration” – the forced expulsion of immigrants – while denouncing globalization and socialists. They are encouraged to practice boxing to “defend their ideas in the field”.

Lévesque was associated with neo-fascist movements in Quebec and Europe long before the founding of Atalante. In 2009, under the name of Raf Stomper, he founded the music group Legitimate violence (Legitimate Violence), of which he is the leader and singer. The songs composed or performed by Lévesque/Stomper are filled with explicit calls for violence, anti-communism and anti-Semitism. There are exhortations to “prepare the Zyklon B!” (the gas used by the Nazis to kill Jews in extermination camps) and to “stab” “effeminate leftists”.

On May 23, 2018, Lévesque and six other members of Atalante invaded the Montreal offices of the Vice Quebec media group after entering under false pretenses. With the exception of Lévesque, the men all wore masks in the colors of the Quebec flag. Throwing leaflets and clown noses, they handed a paltry “2018 media trash” award to journalist Simon Coutu, accusing him of belonging to the “extreme left” and of inciting, through his reports on the groups extreme right in Quebec, “to a war” between Atalante and the so-called “Antifa” militants.

The intended message of this act of intimidation was clear: Quebec journalists who report on the far right do so at their peril.

Accused of breaking and entering, harassment, intimidation and mischief, Lévesque was acquitted on June 10, 2020 by Quebec Court judge Joëlle Roy. In her judgment, favorable to Lévesque, Judge Roy affirmed that “no criminal act had been committed” because Lévesque’s action was “justified and legitimate”. The accused had “delivered a message and communicated information” without “intent to threaten or intimidate”, according to the judgment.

To make such a judgment, Roy banned from the legal proceedings any reference to the broader context of the incident, including the fact that Lévesque is a neo-Nazi, the author of songs with fascist overtones and the founder of an organization whose The logo is inspired by that of the infamous Nazi organization, the SS.

While all of these elements are clearly relevant to a criminal trial to determine the scope and legality of Lévesque’s actions, Judge Roy prohibited the prosecution from introducing them into evidence or even mentioning them.

In July 2020, the Director of Criminal and Penal Prosecutions (DCPP), an agency of the Quebec Ministry of Justice which acts as a Crown prosecutor, decided to appeal Roy’s judgment, but only on the charges of mischief and burglary.

Despite Roy’s decision trivializing the activities of a violent far-right group and condoning what was clearly an attempt to intimidate a journalist, the DCPP refused to appeal the acquittal de Lévesque on the charges of intimidation and harassment. The DCPP also refused to challenge the judge’s decision to ban any reference to Lévesque’s background and Atalante’s activities.

The Quebec Court of Appeal partially allowed this limited appeal on April 12. She found that Judge Roy made several “errors of law” in her legal analysis of the elements of the crimes with which Lévesque was charged. It finds Lévesque guilty of break and enter, but declares a stay of proceedings on the charge of mischief brought against him on the basis of a legal detail: since this second offense was committed “in the context of the same criminal transaction would constitute a multiple offence. conviction for the same event, which is prohibited by criminal law.

Although the Court of Appeal convicted Lévesque on one charge, its decision continues efforts to downplay the broader significance of Lévesque’s far-right criminal activities. The three judges remained completely silent on his motivation. Echoing Lévesque’s own description of Atalante at trial, they called it “a group that describes itself as nationalist, revolutionary and defender of Quebec independence.” The words “neo-Nazi” and “extreme right” do not appear in the judgment, and the reason why the journalist Coutu was targeted by Atalante is not explained.

A person learning the events of May 23, 2018 by reading the judgment of the Court of Appeal could only conclude that a simple break-in had been committed on the premises of a media by an individual belonging to a nationalist group, for no particular reason other than to throw fliers and clown noses. For such a person, the motivation and scope of Lévesque’s criminal actions would remain entirely unexplained and inexplicable.

The decision demonstrates that workers cannot rely on the bourgeois courts and other institutions of the capitalist state – including the main political parties – to stem the rise of the far right. Instead, these establishment forces cover up the crimes and acts of violence of far-right groups, give them a veneer of respectability, promote them when it serves their purposes, and use them when necessary to intimidate and crush the resistance of the working class.

In June 2020, the World Socialist Website analyzed the meaning of the decision of the Court of Quebec exonerating Lévesque from all counts:

Judge Roy’s decision and behavior are linked to the rapidly escalating class conflict. In Quebec, across Canada and around the world, the capitalist ruling elite is embracing reaction and cultivating the far right as a weapon against the working class, fearing that the immense social tensions generated by social inequality, and exacerbated by the health crisis and socio-economic catastrophe triggered by the COVID-19 pandemic, are fueling the growth of a mass anti-capitalist movement.

In the two years since the publication of this article, the situation it describes has only worsened. Large swathes of the ruling class in Quebec and across Canada are cultivating the far right, including through the promotion of Islamophobia and anti-immigrant jingoism, to subjugate the working class to its pandemic policy of shifting profits before life.

A powerful faction of Canada’s ruling elite, including the official opposition Conservatives, much of the corporate media and big business sectors, has encouraged the menacing and illegal occupation of Ottawa, the nation’s capital of Canada, by far-right activists for several weeks last January and February. The so-called Freedom Convoy has flouted and attacked those adhering to anti-COVID protocols, and demanded the immediate lifting of all public health measures. Its larger political objective was the destabilization, if not the overthrow, of the federal Liberal government of Justin Trudeau by threatening political violence.

The far-right convoy was used as a pretext by federal and provincial governments to abruptly dismantle almost all anti-COVID measures.

Then, when the extreme actions of convoy supporters, such as the blocking of border crossings between Canada and the United States, threatened the economic and geostrategic interests of the Canadian ruling class, the Trudeau government, with the full support of the social NDP Democrat and unions, invoked the Emergencies Act. The invocation of this previously unused law to give the capitalist state sweeping arbitrary powers sets a dangerous precedent, which threatens the basic democratic rights of the working class.

The rise of the far right is an international phenomenon.

On January 6, 2021, US President Donald Trump used fascist militias, such as the Proud Boys, as shock troops to storm Capitol Hill in an effort to prevent his Democratic rival, Joe Biden, from being certified in as president-elect, and to overturn the 2020 election. Although the Democratic Party called the events of January 6 an “insurrection,” it limited its half-hearted criticism of Trump as an individual, while ignoring support that large sections of the Republican Party and the military-security apparatus contributed to his coup attempt. .

In Europe, far-right forces such as the AfD in Germany have gained considerable influence with the complicity of the state and traditional bourgeois parties, which have adopted whole swaths of their reactionary policies, especially on immigration. .

In France, neo-fascist Marine Le Pen reached the second round of the country’s presidential election for the second time in a row, facing “president of the rich” Emmanuel Macron, who spent much of his first five years in power cultivating the extreme right. Macron has violently suppressed “yellow vest” protests against social inequality, hailed the memory of Marshal Philippe Pétain, the leader of the collaborationist Nazi Vichy regime, and repeatedly attacked right-wing Le Pen for being “too soft. with Islam.

All over the world, the axis of bourgeois politics shifts sharply to the right with the deepening of the capitalist crisis. Only an independent political movement of the working class can overcome the threat posed by far-right groups cultivated and promoted by the capitalist state and the ruling class.

more on this topic

Trump and the danger of fascism in America

The fascist uprising in Washington DC is a turning point in the political history of the United States.