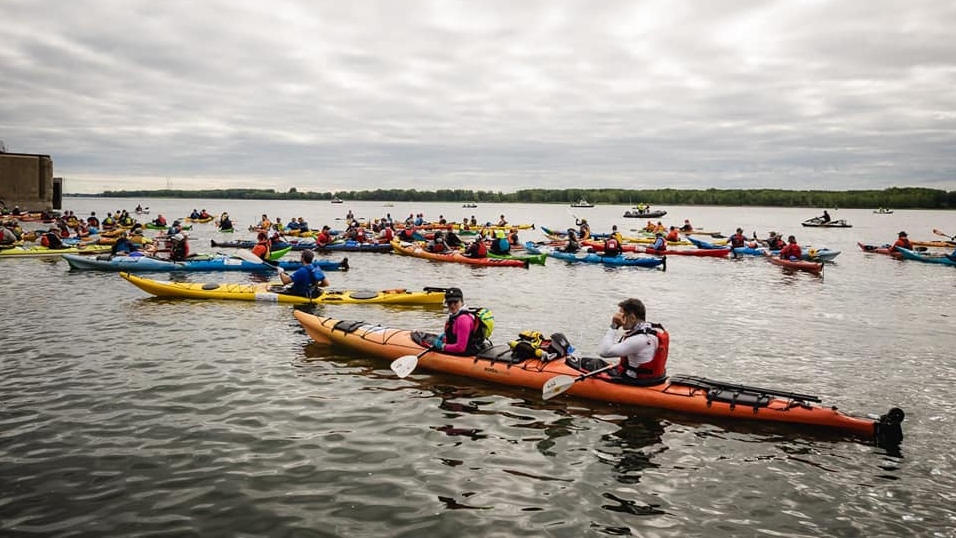 A great sea kayaking excursion is taking place this weekend on the St. Lawrence River between Montreal and Quebec.

The eighth Desgagnés Kayak Challenge brings together 180 participants with the goal of raising $350,000 for Young Musicians of the World.

The organization’s mission is to offer free music lessons to nearly 1,500 young people from at-risk backgrounds.

The kayakers left Friday from Montreal for their first stop in Sorel-Tracy. They will then stop in Trois-Rivières before arriving in Quebec City on the fourth day of their journey.

“This is the largest sea kayaking circuit in the world,” said event founder Mathieu Fortier. “This year, we distinguish ourselves as much by the number of participants as by the distance covered.”

Participants can either do full days of kayaking, averaging 65 km, or half days, approximately 32 km.

“Of the 180 participants, I would say that there are 120 who are not sea kayakers at all, but who are lovers of the outdoors and physical activity,” explained Fortier. “The beauty of the event is to democratize the St. Lawrence River during these four days and to invite Quebecers to meet this jewel of our natural heritage.

Kayakers set out about four hours each morning on the river before a well-deserved lunch break. They paddle a similar distance again in the afternoon. Breaks are organized in Verchères on Friday, Louiseville on Saturday, Batiscan on Sunday and Neuville on Monday.

Each participant must raise a minimum of $2,000 for Young Musicians of the World.

“Our objective, through our musico-social approach, is not necessarily to train virtuosos, but so that young people can develop a sense of competence, their sense of belonging and their sense of autonomy, which are the pillars of motivation,” said Fortier.

Ultimately, the goal is to get young people to project themselves into the future, he said.

“We have students who come from families where no one has ever gone to college or university,” he added.

Fortier said opening up the world of possibilities for these children requires personalized support from music teachers trained in this social approach.

At least a dozen young people who started with the Young Musicians of the World have gone on to pursue musical careers.

The spokesperson for the Défi Kayak Desgagnés is singer-songwriter Louis-Jean Cormier.

“We had the chance to meet Louis-Jean when he was thinking about the idea of ​​creating a foundation to help young people practice music,” recalls Fortier.

Cormier ultimately decided to get involved with an organization whose vision matched his own.

Now he is paddling for the second year in a row.

After a performance in Shawinigan on Friday evening, he joined the Sorel-Tracy kayakers on Saturday morning to paddle with Krista Simoneau, his former partner and manager.

“Last year was my first challenge and I was an amateur, so it was hard for me. But this year, we took lessons and we are already a little more experienced,” Cormier said on Saturday morning. in a video shared on social media.

This report was first published in French by La Presse canadienne on August 13, 2022.