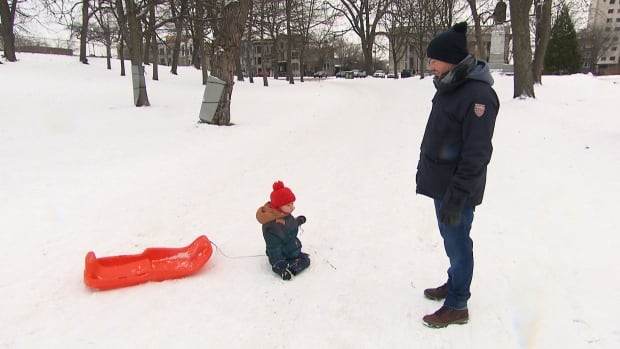 Martin Côté spent the last day of 2021 at La Fontaine Park in Montreal, sledding with his son. He said enjoying the winter activities had helped ease the emotional toll of the pandemic.

“There aren’t a lot of solutions. Being alone and staying away from people right now is life,” he said. “We hope 2022 will be better.”

Quebec is once again imposing a curfew in an attempt to curb the spread of the highly contagious Omicron variant – protecting the healthcare network from an overflow of patients.

The move comes as the number of cases skyrockets, reaching daily highs such as 14,188 on Thursday and 16,461 on Friday.

With more than 100 new hospitalizations now observed every day, the government has expressed concerns about the capacity of the health network to take care of all patients, not just those with COVID-19.

The new 10 p.m. to 5 a.m. curfew went into effect on New Year’s Eve as Prime Minister François Legault seeks to prevent people from congregating in homes.

Although gatherings are banned, the prime minister said Thursday that not everyone abides by the restriction and that the curfew was another deterrent to parties.

Montrealer Geraldine Mazoyer said that with the return of the curfew and the tightening of other public health restrictions, she feels like it was again last winter – when the curfew lasted nearly five months. She had planned to go abroad for the holidays, but that did not happen.

“We have postponed, not to say canceled, Christmas with the family this time again,” said Mazoyer. “At this point, we’re already frustrated anyway.”

He feels bad for businesses that have to shut down, he said, but he’s ready to do whatever it takes to keep the community safe and reduce the strain on the healthcare system. It’s sad to try to keep in touch with people to keep morale up.

“I write to many people every day, to my family and friends, and I can phone people,” he said. “I do it with great pleasure.”

Effect of the pandemic on mental health

As Quebecers face an indefinite curfew, the impact on mental health is raising concerns and experts say staying active and connected is essential.

“In this context, what we want to do is think of ‘okay in this situation, what are the things that I can control, what can I do that will allow me to still enjoy the time that I have” and then really focus on that, ”Gouin said.

He said it’s also important to stay active and spend time outdoors. It could be as easy as taking a walk, he said.

Kim Lavoie, chair of behavioral medicine at the University of Quebec at Montreal, said that “staying angry is not productive, certainly in the short term.”

“Keep in mind that even though the sacrifices are great and we haven’t seen it coming or the government hasn’t seen it coming, this is still what we need to do to get what we want. “, she added.

Lavoie said it’s important to remember why the restrictions are there – that the goal is to get things under control and get back to normalcy.

Opposition says curfew could have been prevented

Quebec’s three main opposition parties criticize the provincial government’s decision to impose the curfew, saying the sanitary order is a sign of the government’s failure to prepare.

If the Prime Minister had acted sooner, then such strong measures would be less necessary, Liberal House opposition leader André Fortin told The Canadian Press on Friday.

Other provinces do not enact such restrictive measures, he said. There are provinces that are speeding up immunization rates and improving ventilation in schools, he said, “but our government is choosing to be restrictive instead of acting.”

Dr André Veillette, immunologist at the Montreal Clinical Research Institute, said it is not yet clear whether the infection pattern in Quebec will follow that in South Africa where there has been a strong increase followed by a sharp drop a month later.

He said it could be more like the UK, where cases “continue to rise, hospitalizations are increasing”.

Veillette said he was in favor of the new measures announced Thursday.

But he said the Quebec government could have started using rapid tests earlier, improved access to N95 masks, and made third doses of COVID-19 vaccines available faster to more people, especially health workers.