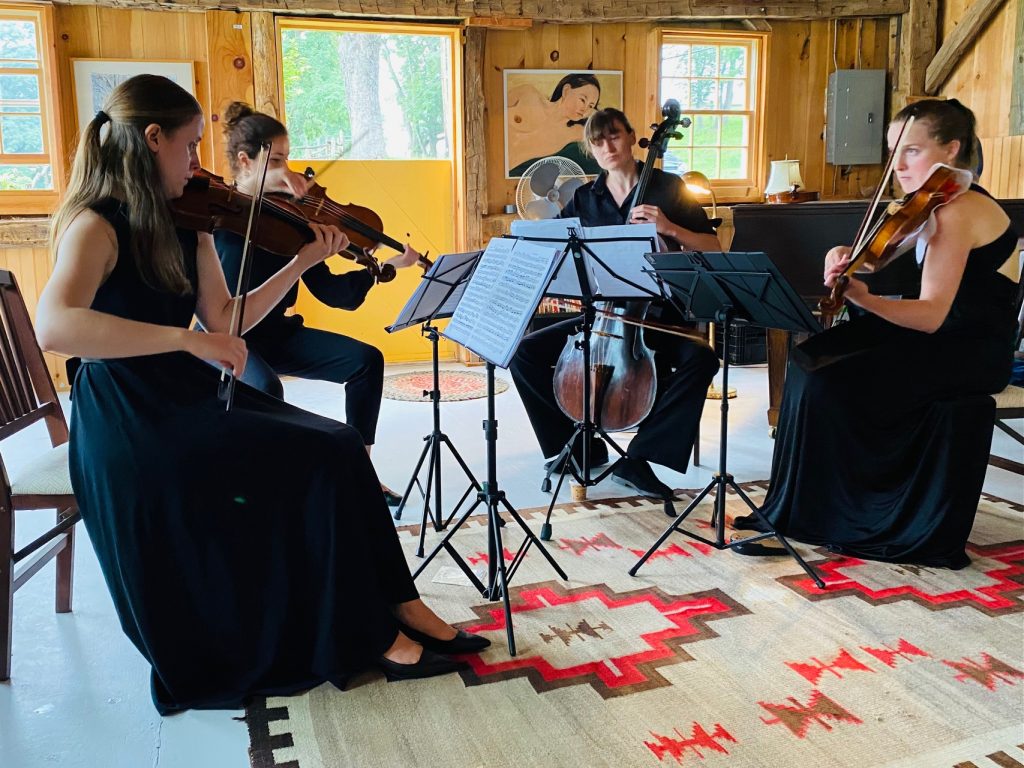 This performance at the Music Barn on Deep Hollow Road in Millbrook, owned by Stephen and Belinda Kaye, featured the charming Salonniere Quartet, a group of young Julliard graduates. Their repertoire ranged from Beethoven and lesser-known Baroque composers to a more contemporary avant-garde piece by Quebec composer Mathilde Côté.

The group of emerging artists are known to play early music. They reunited while studying in the Historic Performance Program at The Juilliard School and were kindly allowed to rehearse at Kaye’s Manhattan Townhouse during last year’s pandemic when performance venues and spaces for repetition suddenly evaporated.

Sophia Shuhui Zhou, pianist and director of chamber music at the Stissing Center said, “Following the tuning tradition of the classical era, the quartet tuned their string from A to 430 Hz, instead of the standard 440 Hz. The audience can hear exactly what Beethoven heard in his day, which is very different today. They aspire to work with living composers on their period instruments and tuning, exploring the potential of unique sounds and feelings. We should all be on the lookout for their future plans!

The group’s well-rehearsed ensemble work was solid, with two violins, a viola and a cello, and the violinists swapping places per piece for the first and second violinist and the viola. The timing requirements of each piece were a perfect backdrop for their individual skills and qualities.

Literal main dish in the afternoon were the last two movements of Beethoven’s lively “Razumovsky”, String Quartet op. 59, no. 2, written in 1806, with its catchy melodic refrain in the Presto which, along with the Allegretto, was played as the finale. The room was dedicated to Beethoven’s patron, Razumovksy, who had served as Russian Ambassador to Austria and Italy, stationed for many years in Vienna. Razumovsky, himself an accomplished violinist, was a cousin of Czarina Elisabeth of Russia and requested that a Russian theme be included in each of the three quartets of Opus 59 which he commissioned and which Beethoven dedicated to him. The piece requires a masterful work of frets and bow, which the young quartet skillfully presented.

The quartet played a movement of Anton ReichaString Quartet in F minor op. 94 no. 3. Reicha, although a contemporary of Beethoven, is less well known. The Czech-born composer, who later resided in Paris, was a longtime friend of Beethoven and is best known for his wind quartets. His string quartets are obscure and the Salonniere Quartet must have searched the Baroque archives to unearth them. The group is known for presenting little-known early music as part of the Gotham Early Music scene in New York City: https://www.youtube.com/watch?v=LDWHILnrFBM

Music patron Stephen Kaye said of the band: “They are young, daring and insightful. Their choice of Pleyel and a little-known contemporary of Beethoven (Anton Reicha) shows the extent of their explorations in the vast musical literature they are ready to undertake.

Despite the challenges of wet weather and a broken gut string on a violin, the afternoon’s performance was lively and full of energy. the Salonniere Quartet is made up of musicians Majka Demcak from Slovakia, Aniela Eddy from Switzerland, Natalie Kress from DC and cellist Cullen O’Neill from Kalamazoo, Michigan. They have toured nationally and internationally at music festivals and stages from San Francisco to Vancouver and have been featured on New York’s WQXR classical music station.

More of their music can be heard on their website: https://www.quartetsalonnieres.com/videos