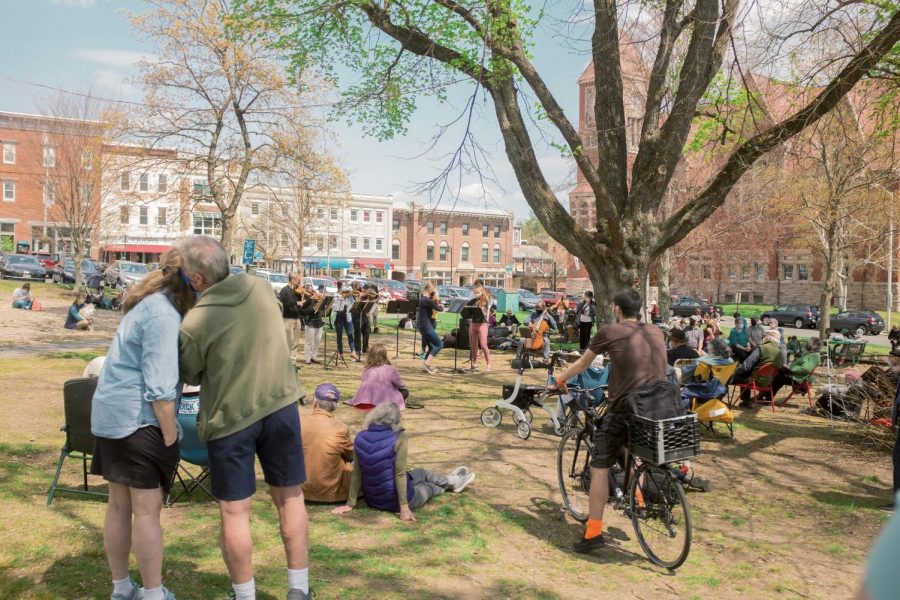 In coordination with Amherst Business Improvement District (BID), the Downtown Amherst Foundation (DAF) is building a performance and music venue called The Drake, filling a gap in Amherst’s cultural and recreational scene: a space for live performances of all types.

The Drake will be located on the second floor of the bank building at 24 N Pleasant St., replacing the High Horse, a restaurant and bar that closed shortly before the March 2020 pandemic. Plans for the grand opening by The Drake are set for winter 2022.

The namesake of a former bar on Amity Street, The Drake is an attempt at nostalgia but also a venture toward creating economic development, vibrancy and diversity in downtown Amherst, said Gabrielle Gould, Executive Director DAF volunteer and salaried executive director of Amherst BID. .

“Save The Drake” and “For Willy, For Humanity” are two graffiti that have lived for years on the west side of the Amherst Cinema building, commemorating a former bar inside the Drake Hotel which closed in 1985 This latest graffiti refers to bartender Willie Whitfield, who operated the rathskeller (basement bar) at the Drake.

Unlike the old Drake, however, the new Drake is neither a simple bar nor an exclusive for a specific age group. The Drake aims to be a rich and welcoming cultural and artistic destination. “This will be Amherst’s first dedicated performance and live music space,” said Gould.

The Drake will be open to people of all ages and will feature all types of performances: live music, improvisation, spoken word and comedy, to name a few. The venue will also work to host art gallery exhibitions, community events and science nights. “We’re really trying to intersect the arts,” Gould said.

Yet in addition to being primarily a performance and community space, The Drake will also have a full-service bar that will feature beer, wine, and cocktails operated by Lincoln Allen, who managed the bar at Amherst Coffee. The bar will serve “classic and quirky cocktails, as well as a small but solid range of local draft beers and a natural wine list,” Allen said.

A jazz musician himself, Allen said, “performance opportunities at Amherst were few and far between, and few were ideal for a jazz setting.”

“The Drake can make a difference with regional and national acts as well as strong local music programming.” Allen said. He is delighted to “see the space develop its own life and become a cultural cornerstone of the community”.

Several local partnerships are involved in the making and operation of The Drake. Klondike Sound LLC of Greenfield, MA, provides an integrated audio, sound and lighting system.

In collaboration with DAF, Laudable Productions, a multimedia production company based in Easthampton, MA, will bring event planning expertise to schedule the performance space.

Working with professional event programmers and bringing cutting edge sound, lighting and staging, The Drake wants to be the place where people can see the next rising star while also featuring world-renowned artists. Additionally, being a destination for visitors and locals, The Drake hopes to create community, forge bonds and foster collaborations.

The space is designed by Kuhn Riddle Architects, a local Amherst-based design and architecture firm. The company has been involved in all phases of the project starting at “the conceptual level,” according to Jonathan Salvon, director and owner of the company.

Two of the architects directly involved in the design – John Kuhn, founder and principal emeritus of Kuhn Riddle, and Brad Hutchison – are also musicians on one level. “In between, they kind of bring the richness of the practicality to what makes a good performance space,” said Salvon.

Work is currently underway to demolish the old location occupying the site to create “one big, beautiful open space,” said Gould. The new space can accommodate around 130 to 150 people in a seated position and 180 in non-seated events. The renovations will complete the space with a stage, a green room, a dressing room and a living room.

As initial seed funding for The Drake, a total of $ 175,000 was awarded to Amherst BID through the Massachusetts Office of Business Development Regional Pilot Project Grant. For its part, the Amherst BID contributed $ 80,000 to this project to “build state-of-the-art lighting and sound equipment for the stage,” said Gould.

Gould said The Drake also requested $ 300,000 in American Rescue Plan Act (ARPA) funds from the town of Amherst. ARPA is federal financial aid that was enacted to help with economic recovery from the COVID-19 pandemic.

More funding for the project is sought through donations. The Drake is looking for $ 250,000, which he will match with a matching grant, bringing him to a total of $ 500,000. Donations can be made through Patronicity, or by check / cash to the Downtown Amherst Foundation at 35 S Pleasant St., Amherst, MA 01002.

Mustafa Almutawa can be contacted at [email protected].