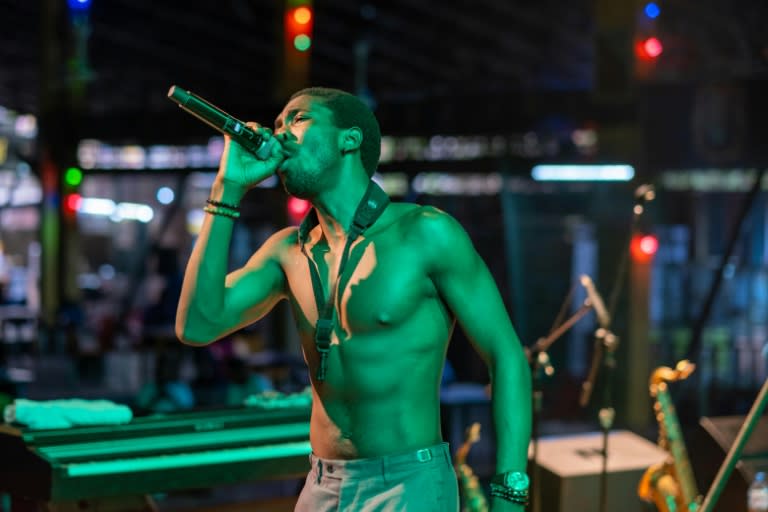 In the Kuti family, music is clearly in the genes.

Nearly 25 years after the death of Nigerian music legend Fela Kuti, his son Femi and grandson Made are taking his Afrobeat sound to the United States.

With their double album ‘Legacy+,’ the father and son duo have been nominated for this year’s Grammys, hoping to win the Global Music category at the US Music Awards in Los Angeles on Monday.

This is the first Grammy nomination for Made Kuti, 26, but the fifth for Femi, who started her career at the age of 17 alongside her famous father. Femi Kuti’s younger brother Seun Kuti was also nominated in 2018.

The new album is divided into two parts, one for the father, the other for the son, who plays all the instruments of his section, from saxophone and drums to trumpet and piano.

“My music is very influenced by what I listened to as a child, obviously it’s my grandfather, my father and my uncle,” Made told AFP at the Shrine, Fela’s famous concert hall in Lagos.

On stage, shirtless and with a saxophone strapped to his chest, Made bears a striking resemblance to his grandfather, who commanded a strong stage presence often with his face painted.

He runs his fingers over the saxophone before leading his band in a rehearsal of “Free Your Mind”, the title track from his debut album, released in February 2021.

The influence of rock mixes with the genius of Fela – a powerful cocktail of repetitive and hypnotic High Life style, Yoruba polyrhythms, jazz and funk.

Made’s calm, composed demeanor contrasts with that of her grandfather, who was all exuberant and full of energy. But the lyrics are just as engaging.

Throughout his career, Fela Kuti has consistently denounced elite corruption, dictatorship and corporate power, using music as a weapon.

“People see Fela as a figure of freedom, liberty and justice, the revolutionary mindset of being able to fight for what you believe in,” Made said.

After the release of his anti-military album “Zombie” (1976) during Nigeria’s military dictatorship, Fela’s residence, known as the Republic of Kalakuta, was completely razed in an army assault.

Fela himself was repeatedly imprisoned and tortured under his country’s military regime.

“He was by far one of the most talented musicians (…) but also a great source of sincerity, integrity and passion,” Made said.

A quarter of a century after his death, Femi and Made Kuti are tackling the same evils, using songs about the daily lives of Nigerians as ammunition.

Nigeria has not been a military dictatorship since its return to democracy in 1999.

In “Different Streets”, Made sings acerbically like Lou Reed: “Grandpa didn’t predict the future with his songs, he talked about everything he saw, everything that was wrong… Like it’s scary that we are facing the same problems.” 70’s”.

Father and son draw crowds for their tours of Europe and the Shrine, which has become the haunt of Fela fans, music lovers and expats.

Almost every week they open their doors to the public to offer free concerts.

But their music is not as popular in Nigeria as that of Fela in his heyday.

These days, Nigerian youth prefer to dance to Afropop, a derivative of Afrobeat played by superstars like Davido or Wizkid, who is also a Grammy nominee this year.

The music business today is not an industry that 59-year-old Femi Kuti views very favorably.

“We have to distinguish between an artist and a musician,” he said.

Afropop lyrics praise capitalism more than militancy, but lately the genre’s repertoire has expanded and the lyrics have become more political.

Nigerian youth are often portrayed as resilient or even apolitical, but they took to the streets en masse in October 2020 to protest against police brutality and poor governance.

During the peaceful, swift and bloody demonstrations, the young people danced to the music of their parents. Fela Kuti’s Rebellion classics — “Sorrow, Tears and Blood” or “Zombie” — echoed everywhere.