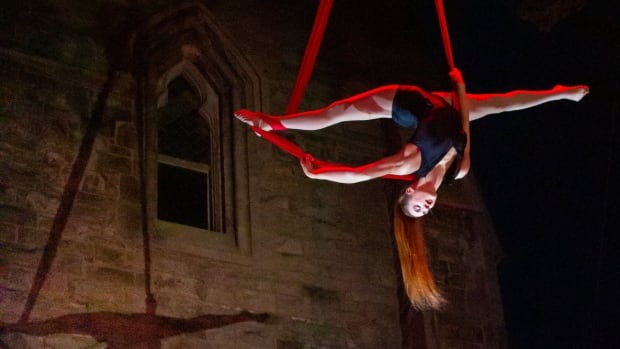 After being canceled in the summer of 2020, the 12th edition of the Montreal circus festival, Montreal Completely Cirque, is back and puts Quebec artists in the spotlight.

Montreal businesses as well as those in Quebec and elsewhere have passed pandemic containment to hone their skills and invent new routines.

For many artists, the festival represents the first time they have been able to perform in front of a live audience in months.

“All the different performances that you will see, a lot of them were done this year during the pandemic in residence at TOHU. And now it’s the first time that all of these amazing little performances will be performed for the public, ”said Ruth Juliet Wikler, deputy director of the festival’s programming. La TOHU is a performing arts theater in Montreal.

“TOHU has opened up all its possible spaces. We worked with the National Circus School, we worked with Cirque du Soleil in their studios to create spaces for artists to create new works, even when they couldn’t share them with the public.

Wikler said the festival, which runs July 8-18, features indoor and outdoor shows, as well as free performances on St-Denis Street and touring artists who will visit various areas of the city.

She specifies that this year, the festival has arranged the space of its main performance hall, TOHU, located on rue Jarry in Saint-Michel.

“We pitched a big tent, we even set up picnic areas under the trees here,” she told CBC’s Let’s Go. “It really is a circus village.”

Wikler has indicated that the companies Throw 2 Catch and Marguerite à bicyclette will be on tour and that there will be pop-up performances each evening of the festival at TOHU and at the location of St-Denis Street between Ontario and Ontario streets. de Maisonneuve.

The festival schedule includes a number of secret venues, site-specific outdoor performances, as well as a cabaret show in downtown Montreal at St. Jax’s Anglican Cathedral.

Another show, Cabaret Yam !, comes from a circus company Kalabanté Productions based in Saint-Michel. The show features music, dance and acrobatics inspired by West African rhythms.

Wikler says after months of uncertainty and canceled events, performers are eager to return in front of a crowd.

“They really live and breathe the performance. The audience gives the artists so much energy,” she said.

“Particularly for the circus, where they work so hard to master these incredibly difficult skills and they really want to put them in front of you and feel your appreciation. And that beautiful exchange can only really happen when we’re able to physically come together.”

Bruno Gagnon, artistic director of FLIP Fabrique de Quebec, told CBC’s All in a Weekend that his team are excited to bring their Six Degrees show to the festival, after touring Quebec last year. .

“This is the first real show in six months,” he said. “It’s been a while, so yeah, they’re very excited.”

He said the show had to be adapted to meet COVID-19 rules, but the artists involved chose to view it as positive.

“Once we have a challenge, it becomes an opportunity.”

He said all the hard work was worth it to put the audience back on a smile after a particularly difficult year.

“Having to touch and be close and feel a whole audience laughing… the infectious energy when you see a live entertainment show is something that we really look forward to.”

LISTEN | The Director of FLIP Fabrique is looking forward to this year’s performances:

We talk to the general and artistic director Bruno Gagnon of the Flip Fabrique de Quebec circus company. They are in Montreal for the Montreal Completement Cirque festival. Bruno tells us about some of the nervousness artists have after an extended hiatus during the pandemic lockdown. 9:16