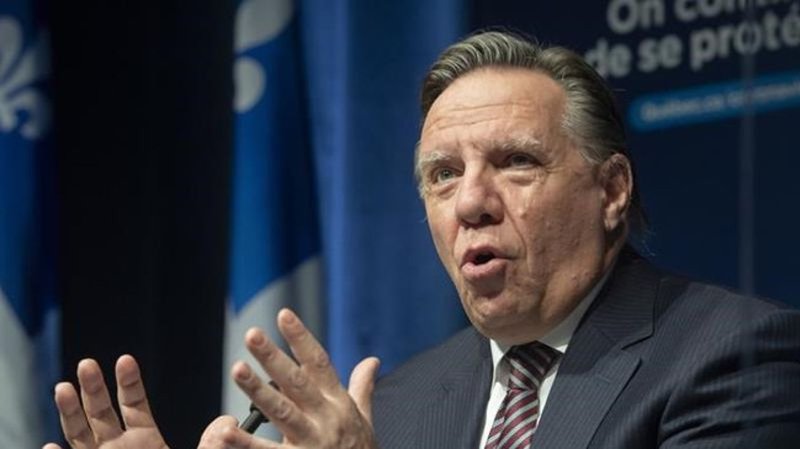 “There were over 11,300 new cases yesterday alone,” Tam said Wednesday. This was an increase from an average of just 5,000 cases per day last week. She added that “the modeling shows that by the beginning of January we could have a very high number of cases, which underlines the need for urgent action now to reduce the acceleration.”

To avoid a sudden rush on the health care system, Tam urged all Canadians to do what they can to reduce the spread of the virus.

A Liberal MP found himself in hot water after challenging advice not to leave the country unless travel was essential.

Chief Government Whip Steven MacKinnon released a statement Wednesday saying he was “deeply disappointed” that Liberal MP Yves Robillard had traveled outside of Canada in violation of party instructions. Robillard has been censored.

The whip says Liberal MPs have been urged to avoid non-essential international travel as the COVID-19 Omicron variant increases its grip – reflecting government advice to members of the public.

MacKinnon has said that although Robillard is fully vaccinated, the MP’s travel during parliamentary recess was not considered essential and he will therefore be removed from his post as a member of the Standing Committee on National Defense.

MacKinnon, who has not mentioned Robillard’s destination or the reasons for his trip, intends to discuss with the MP his decision to leave Canada upon returning from Parliament. Robillard did not immediately respond to a request for comment.

What we are watching in the United States …

WASHINGTON – President Joe Biden’s message to the American people about facing the Omicron variant coronavirus comes with a heavy dose of cajoling as other countries issue executive orders for their citizens.

America’s ideologically polarized reaction to vaccines and masks, and its federal system in which states have broad authority over health matters, limits some of the options Biden can exercise – at least without fueling political pushes that could divert attention from its urgent public health message.

Jen Kates, director of global health for the non-partisan Kaiser Family Foundation, said one of the main lessons the United States has learned from the pandemic is that “politics matters.”

“We are a big country, we are a complex country, and on every issue the supporters are divided,” she said. “That, coupled with local control, and we end up with a rambling response. “

France has banned public concerts and fireworks during New Year’s celebrations while calling on people to avoid large gatherings and limit the number of family members who gather for Christmas. German Chancellor Olaf Scholz and state governors have agreed to restrictions to go into effect before the new year, including limiting private gatherings to 10 people, closing nightclubs and hosting large events like football matches. football without an in-person audience.

In the United States, Biden has not issued new travel warnings or called for the cancellation of public events.

On Tuesday, the president appeared to be careful about trying to connect with viewers on television. He avoided a slogan he and others in his administration used often – “pandemic of the unvaccinated” – and instead tried to appeal to vaccine refusals as fellow Americans.

“I’m honest with God, I believe it’s your patriotic duty,” Biden said, urging the unvaccinated to get vaccinated.

He even invoked his Republican predecessor. “Former President (Donald) Trump announced the other day that he had received his recall,” Biden said. “This may be one of the few things that he and I agree on.”

What we watch in the rest of the world …

BEIJING – China has ordered as many as 13 million people locked in neighborhoods and workplaces in northern Xi’an city following a spike in COVID cases 19, sparking panic buying just weeks before the country hosted the Winter Olympics.

State media say city officials have ordered all residents to stay in their homes unless they have a compelling reason to go out and have suspended all transportation to and from the city except in special cases. . One person from each household will be allowed to go out every two days to buy basic necessities.

Xi’an on Wednesday reported 52 new cases of the locally transmitted coronavirus in the past 24 hours.

These measures have been stepped up in recent days before the start of the Beijing Winter Olympics on February 4.

Xi’an’s restrictions are among the toughest since China imposed a strict lockdown on more than 11 million people in and around the central city of Wuhan in 2020 after COVID-19 was first detected there times end of 2019.

Social media posts recorded panic purchases of groceries and household items, with the government saying new supplies would be brought on Thursday.

MINNEAPOLIS – Court officials are closing in on the estate division of pop superstar Prince.

The Minneapolis Star Tribune reported on Wednesday that the November tax returns show that the Internal Revenue Service and Comerica Bank & Trust, the administrator of the estate, reached an agreement in November on the total value of Prince’s assets.

The exact number was not disclosed, but it could rise to over $ 100 million. Last year, the IRS determined that Prince’s assets were worth $ 163.2 million. Comerica estimated the figure at $ 82.3 million. IRS officials estimated Comerica’s total to be so low that they imposed a $ 6.4 million precision penalty on the estate.

The Carver County probate court has yet to approve the deal. The court is expected to begin discussions in February on how to allocate assets.

Prince died of a fentanyl overdose at his home in Paisley Park in Carver County in April 2016. He did not have a will.

A paleontologist from the University of Calgary says she has seen well-preserved dinosaur egg fossils before, but nothing like it.

The fossil, the subject of a new article published on Wednesday, is so detailed it reveals even more about the deep relationships between dinosaurs and birds, their modern-day descendants.

Darla Zelenitsky says the find involves a 65-million-year-old type of theropod dinosaur called an oviraptorid, a species already on the path to avian evolution.

First discovered in China around 20 years ago, the specimen is so completely preserved that it reveals the posture of the future theropod inside its shell. With his back curled up against the wide end of the shell and his head tucked between his arms and legs, he looks a lot like an unhatched chicken.

Zelenitsky says “The skeleton is curled up in an embryonic bird-like pose.” She adds that “birds were thought to have a unique posture in the egg before they hatched. It is evident from this fossil that some of these postures seem to have first evolved in their dinosaur ancestors. “

This is the first time that scientists have been able to see how dinosaur embryos are positioned inside their eggs. Previous egg fossils have been too fragmented. Zelenitsky says “it strengthens the bond between these theropod dinosaurs and birds.” This link is growing stronger as more and more evidence comes in.

This report by The Canadian Press was first published on December 23, 2021