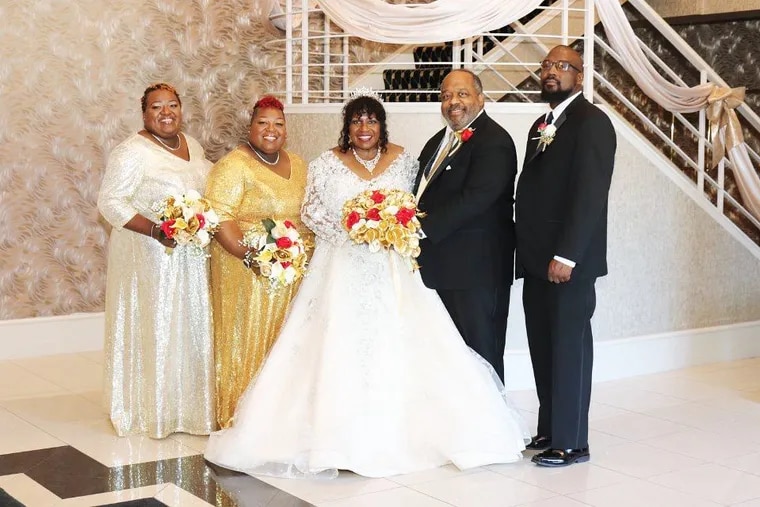 In 1962, Jane Murray scanned the badges of incoming Julia R. Masterman School students in her tour group until she found Michael Gilmore – a favorite cousin of her friend Ethel, who had asked her to watch on him.

Jane introduced herself, mentioned Ethel, and offered a friendly “Welcome to Masterman.” Mike didn’t say anything.

Assuming he hadn’t heard her, Jane tried again. “He didn’t open his mouth. He just looked at me,” she recalls. She was irritated.

Mike doesn’t remember meeting Masterman but he doesn’t doubt it. “I was very shy and introverted,” he said. “I would have been so nervous that I wouldn’t have said anything.”

Even though they were both sopranos in the school choir, Jane didn’t talk to him.

Masterman didn’t have a high school at the time, and in 1966 Mike was a senior at Overbrook High. He had a tuxedo, a blouse, ball tickets and a problem: his date had the flu. Mike spoke to his cousin Ethel, who told his mother, who asked her dear friend if her daughter Janey could be her nephew’s date.

“I hope it’s not Michael yet,” was Jane’s first thought. But her practicality prevailed: her parents had agreed to this one and only exception to their strict rule of not dating until the age of 16, and going to the Overbrook Ball would mean the bragging rights in girls’ high school.

Mike remembers this encounter: his father drove him to Jane’s house, which was filled with family, friends and curious neighbors. “I was extremely nervous. Then Janey came down the stairs and came into my life in an empire waist dress – red velvet with white brocade. And she was wearing a tiara,” Mike, now 72, said.

Dancing and fun at the Philadelphia Hotel was followed by coffee and apple pie at the Harvey House, and then a reinstatement of Jane’s parents’ dating rules.

Thanks to her friend Ethel, who has since died, Jane knew that he had graduated from high school and attended Howard University in Washington DC. “When I celebrated my 16th birthday at the Y, I invited him,” she said. Knowing that Jane was classically trained in organ, piano, violin and clarinet, Mike brought her a recording of Brahm’s concertos. From then on, they write weekly letters. Whenever Mike was home, they went to dinner, to the movies, or bowling. “I was still so nervous and thrilled by this beautiful young woman. I would dial six numbers and hold the 7th on my finger, afraid I would drop it,” he said. “But every time I called, she always said yes.”

At Howard University and Philadelphia, students were among those organizing rallies and demonstrations in support of civil rights and against the Vietnam War.

Mike temporarily returned to Philadelphia when Howard students took over the administration building to protest mandatory ROTC. Then “when Dr. Martin Luther King was assassinated, the school closed again,” he recalls. “My father came to get me during the riots.”

On the night of King’s assassination, Girls’ High was holding an Olympic-style pageant. “They announced that Dr. King had been murdered and ended the whole thing,” Jane said. Jane estimates that 20% of her classmates at Girls High were black, but few teachers were. This made Jane and her friends feel like they had few adults at school with whom they could really talk about civil rights and the loss of Dr. King. She then co-wrote a book about these experiences.

Mike transferred to what is now West Chester University, where he studied English. He later served in the Army Reserves and earned a law degree from the University of Pennsylvania. Mike became a corporate lawyer, working 32 years at Cigna before retiring in 2011.

Jane earned a Bachelor of Music degree with a double major in Organ and Vocal Performance from Boston University. She went on to earn a master’s degree in music from the University of the Arts, a second master’s degree in education from Antioch, a doctorate in musical arts from Combs College, and a doctorate in education from St. Joseph’s. Jane served 39 years in the Philadelphia School District as a teacher, counselor and principal before retiring as a district administrator in 2013. She also had a second career in musical performance and performing. private education.

While Mike and Jane were both in college, both sets of parents moved from West Philadelphia to homes in Overbrook, one house apart.

At that time, Mike and Jane were in love. “He was so flirtatious,” Jane said. “He was handsome, he spoke well and he was a Christian gentleman. He was like a prince and I was proud to be around him.

“She made me laugh,” Mike said. “She was bright, beautiful and talented, kind, gentle and Christian – everything I was looking for in a companion.”

In April 1971, Jane spent a day with her father. “When Michael asks you to marry him, I want you to say yes,” he told her. “Did Mike talk to you?” asked Joan. He had not. Jane said she wasn’t focused on marriage yet – she had college to finish. Her father repeated his wish and Jane assured him that his answer would be yes.

Jane was surprised when her mother called to ask her to fly home from school the weekend before her final final. Upon arriving in Overbrook, Jane learned that her father had died of a brain hemorrhage at the age of 59.

Mike and Jane are still reassured that Mr. Murray gave them his blessing.

On July 31, 1971, Mike prepared a complete dinner using recipes from a Good Housekeeping magazine, invited Jane over and popped the question.

They were married on August 5, 1972, at the Tindley Temple and hosted a reception for 500 guests in the church’s reception hall. Jane and Mike spent their wedding night at the Plaza Hotel in New York before spending a week on their honeymoon in Quebec.

What the couple calls “Golden Week” began on a Sunday in May 1975 with Mike’s graduation from law school. That Thursday, Jane graduated from the University of the Arts with a Masters in Music. A celebratory dinner with the parents was crowned with even more exciting news: they were expecting. His daughter Jacquelyne Michelle was born later that year, followed by daughter Janet Nicole in 1979 and son Michael David Jr. in 1984.

The couple shared their love of travel with their children, taking them to California; the Alamo; Roanoke, Virginia; and Little Rock, Ark. They went to Disney seven times and visited 37 states.

Mike and Jane now live in Springfield Township, Montgomery County. They attend White Rock Baptist Church in West Philadelphia and Grace Baptist Church in Germantown and sing in both choirs. She is a Diamond Life member of Delta Sigma Theta sorority and he is an active member of Alpha Phi Alpha fraternity. Through these organizations, the two strive to prepare young people for college and promote social action through voter registration and education.

The couple are enjoying family time with their children and grandson, Michael David Gilmore III, and continue to travel. They went to 27 countries.

On August 13, 2022, the couple celebrated their golden wedding anniversary at the same church where they got married. They exchanged new rings and new vows – this time, writing their own.

Jane asked Mike to reach out to her. “We always walk hand in hand through life and look each other in the eye,” she told him. “These eyes and these hands say I love you.”

Mike told Jane that he fully believed she was a gift from God to him. “You are more than my better half, you are my best 99%,” he said. “I couldn’t be where I am now without you.”