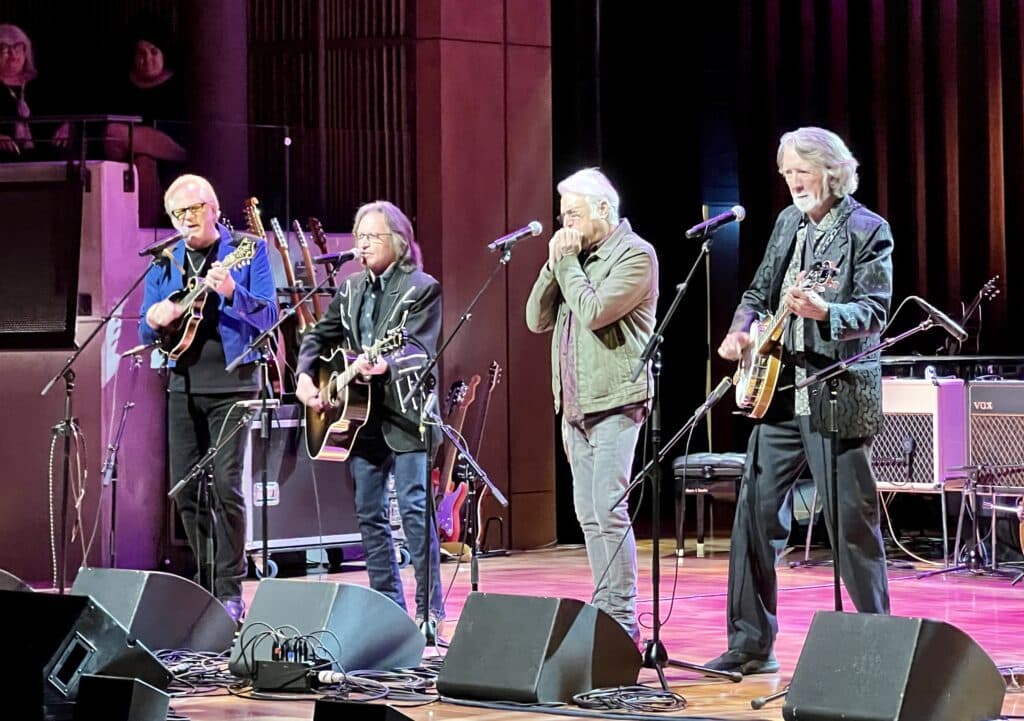 When the Country Music Hall of Fame opened its three-year exhibit “Western Edge: The Roots & Reverberations of Los Angeles Country-Rock,” the icing on the cake was a concert celebrating the pioneers who fused country (&Western, as it was known then), folk, bluegrass, jug band and rock music in a sound that would eventually fill arenas, start an intergenerational movement that would see Will The Circle Be Unbroken unite hippies with their sources and ultimately spawn the cowboy movement. -80s insurgent punk.

Rock & Roll Hall of Famers Richie Furay (Buffalo Springfield, plus Poco) and Chris Hillman (The Byrds, plus the Flying Burrito Brothers and Desert Rose Band) have overcome a bill designed to bring the evolution of a scene. Longtime Emceed Los Angeles Times editor/screenwriter Randy Lewis, the magic of the night saw the music live and breathe not through nostalgia, but through the fire of the creators of the genre.

With an all-star line-up of Alison Brown on banjo, Sara and Sean Watkins on fiddle and guitar, Rob Ickes on dobro and Mark Fain on double bass, the evening’s multi-instrumental musical director, John Jorgenson, firmly anchored the Kentucky instrumental “Flat Fork” and The Colonels’ “If You’re Ever Gonna Love Me”. Yes, the Eagles filled stadiums, but they too tapped into those legendary influences.

What unfolded was a caravan of artists who demonstrated just how interconnected the Dilliards, Byrds, Burritos, Buffalo Springfield, Crosby, Stills, Nash (& Young) and beyond were. The ever-soft-spoken Rodney Dillard and Gene Clark — portrayed by his son Kai — sang those early stage songs. Desert Rose Band members Steve Duncan on drums and Jay Dee Maness on steel served in the house band built, as lead vocalist/Desert Rose Bander Herb Pedersen appeared for the first of many times.

Tracking the movements of musicians and bands offered a sense of the camaraderie that defined the initial explosion of folk-rock morphing into what spawned Poco, in America, even the singer/songwriter movement that emerged from The Troubadour. But more than who knew who needed a musician, there was real joy at work – and it sparkled on stage.

That joy emerged from Jeff Hanna, who talked about the Nitty Gritty Dirt Band’s brief stint as Linda Ronstadt’s backup band, where they found Michael Nesmith’s “Some of Shelley’s Blues.”

Joined by Jimmie Fadden and John McEuen, who showed off their terrific comedic timing, the trio delivered a seductive “Shelley’s Blues.” The story of a song about a dead dog that broke the band together “Mr. Bojangles,” which earned the first standing ovation of the evening.

The warmth of those moments made the show shine. Time and time again, the love of that era, those songs and others permeated the performances. In a one, two punches strapped to Gram Parsons, Chris Hillman and Pedersen delivered the quick “Time In Between,” Hillman’s songwriting breakthrough recorded by the Byrds, then pivoted to “Sin City.” Burritos with the great Al Perkins, a Souther-Hillman-Furay Burritos/Manassas/Vet, on steel.

From there, the tempos quickened and thickened – and the future of “country rock” emerged. Richie Furay and his brilliant voice rocked the room with Buffalo Springfield’s “Kind Woman”.

Followed by Watkins Family Hour (Sara and Sean) and James Inveldt’s return to the stage, Poco’s “Good Feeling To Know” had the audience singing along.

When Hillman returned for Souther-Hillman-Furay’s “Fallin’ In Love,” he was enthusiastic about Furay. The third standing ovation of the night set up an intermission. For all the connecting points in the first half, there was plenty of ground to cover. Unfortunately, with San Francisco’s Hardly Strictly Bluegrass Festival overlapping, several key players [Emmylou Harris, Buddy Miller, Jim Lauderdale] were unavailable.

Yet the mid and late 70s and 80s were just as dynamic. Add to that Linda Ronstadt’s inability to sing, an uneven if not inaccurate reflection of why country-rock has become ubiquitous.

While cooking with what’s at hand is essential – Sara Watkins’ painful version on Jackson Browne’s “The Late Show” opened new portals to the song’s vulnerability and Vince Gill’s stories about Byron Sedan taking a chance on him then meeting Rodney Crowell who demanded to know how he sang “my song better than me” broadened the spirit of the night – so much of what populated this massive wave of pop culture and its country response /punk was unsuccessful.

Although the names of Karla Bonoff and Warren Zevon were mentioned in passing, no context was given…the connection between X, Los Lobos and the Blasters quoted explored the power of this wave and this era…and women were also not correctly represented. Lucinda Williams, Katy Moffat, Nicolette Larson, Valerie Carter, Wendy Waldman, Jann Browne, as well as Carlene Carter and Rosanne Cash also populated this world; Fireball singer Maria McKee of Lone Justice blasted hard country music on college radio stations on the eve of MTV.

Everyone matters, but in a time when white men define the narrative, losing sight of the impact of Harris and Ronstadt’s sisters is glaring.

From the Palomino scene of the 80s, Intveld and Rosie Flores carried the torch. The rockabilly-tinged Intveld, who lost his brother in Rick Nelson’s plane crash, witnessed this era throughout his career. he supported Denny Sarokin on Nelson’s perils on the “One Night Stand” route. He later played Dave Alvin’s No. 1 song of fame, loneliness and self-consumption, Dwight Yoakam, with a haunting burn.

Rockabilly filly Flores put on her electric guitar lick to lick with the boys, letting off steam to her own “Cryin’ Over You” and the Eagles’ “Already Gone.” Shredder from San Diego, she popped up in punk clubs and juke joints delivering on the blues/country/rockabilly promise of Southern California country.

Without the latest era of the genre, Western Edge could not be the dominant exhibit in the Country Music Hall of Fame. Doubly ironic as many consider this the founding of the country as the 20th century became the 21st. Not to mention the second or third wave of the Dirt Band – “Make A Little Magic” (featuring Larson) and “Viola! An American Dream” (featuring Ronstadt) were pop hits that kept the country-rock flame alive in the late ’70s, while their “Shot Full of Love” kickstarted the Southern California migration to Nashville. evening ended with a chant “You Ain’t Goin’ Nowhere”, originally on Sweetheart of the Rodeo No mention was made of the Bob Dylan song as being the contribution of Hillman and Roger McGuinn to Will The Circle Be Unbroken, Vol I1.

Sometimes cooking with what you have is fine. Indeed, a night of exquisitely performed beloved songs emerged. But to mark a historic event, perhaps a trip to the store was necessary. Or maybe it creates the opportunity to lean down the line.