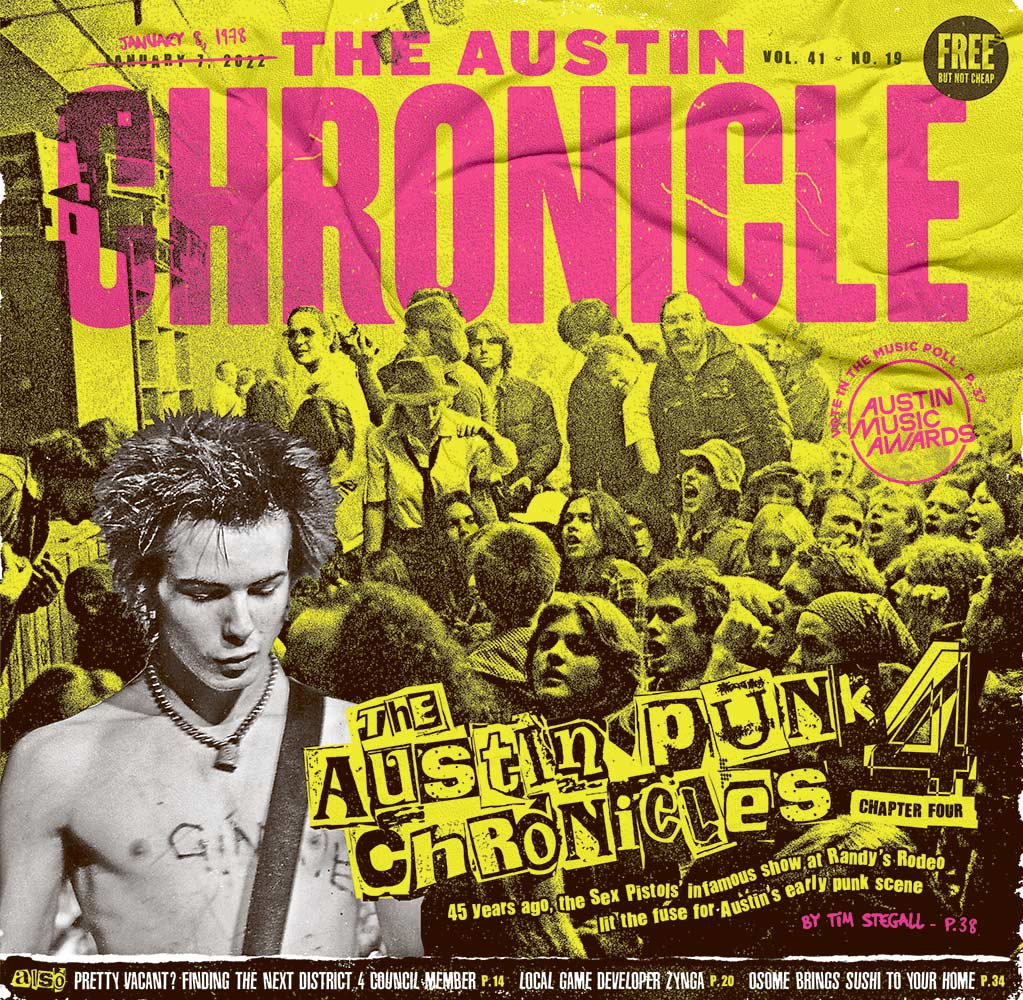 Tim Stegall says former music publisher Raoul Hernandez was the one who first gave him the impetus to start writing Austin punk history for posterity. Tim started writing this book in 2019 – almost 30 years after he started writing for the the Chronicle – and we publish chapters as he completes them. This week marks the culmination of a series of three-week chapters; Music editor Kevin Curtin was keen to schedule the series for the anniversary of a pivotal Sex Pistols show in San Antonio. It was a terrific long read, reinforced by incredible stock photos of Ken Hoge, Joe Bryson and David C. Fox, and, of course, the perfectly punk styling of our finest art director Zeke Barbaro. (Kevin also thanks Leea Mechling, executive director of the Austin Museum of Popular Culture, for opening his archives to us.)

I interviewed Tim before the holidays for the the ChronicleKOOP Radio’s weekly show (which, by the way, airs Fridays at 6 p.m., 91.7FM – you should check it out).

“I never thought when I was writing in fanzines in the late 80s that I would end up being an investigative journalist writing punk rock history,” he told me, a little verklempt .

The life of a freelance punk rock journalist isn’t always easy, and it’s so encouraging to see Tim flourish in this phase of his career. He said he was about to make history as the character himself in the book. I can’t wait to see where his punk chronicles go.

Missed previous installments? You can catch up on everything austinchronicle.com/austin-punk-chronicles.

the the ChronicleAustin’s annual music survey kicks off in this week’s issue. Find this year’s nominees on p.37 of this week’s issue, then go to vote.austinchronicle.com to vote for Best Band of the Year, Best DJ, Best Violin Player, Best Poster Artist and 47 other categories celebrating the artists and industry professionals who are making their mark on the Austin music scene. Winners will be announced at the 40th Annual Austin Music Awards on March 8.

Queer Eye Makes Over Austin: The locally-shot sixth season of the uplifting Netflix reality show debuted last week. Austinians get a strange eye retouches include Broken Spoke’s Terri White; Chris Baker, who helps the homeless community of Austin as executive director of The Other Ones Foundation; and hip-hop artist Reggie DeVore, aka BlackLight.

Dale Dudley Leaves KLBJ-FM: Famous Morning DJ announced Tuesday that he has been fired from his longtime gig; KLBJ-FM owner Waterloo Media has reframed its release as a non-renewal of contract. In an upbeat Facebook post, Dudley wrote: “It was a great race and I had a lot of fun!”

Simply the Best: The Austin Film Critics Association has released the nominees for its 2021 Film Awards. Occidental The power of the dog, the triumphant return of Oscar winner Jane Campion to cinema, landed nine nominations while Dune and Licorice Pizza won eight nominations each. The winners will be announced on January 11.

Tune in on Fridays at 6 p.m. on KOOP community radio. Past episodes at austinchronicle.com/av.