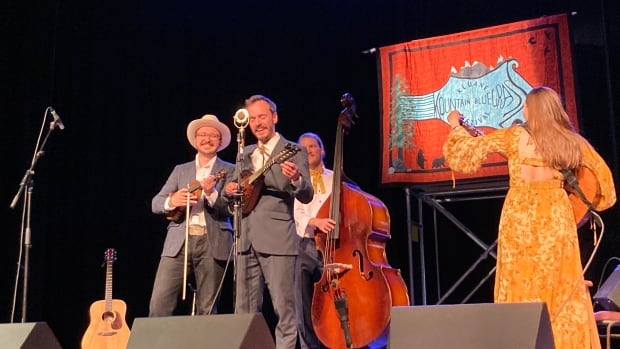 Haines Junction, Yukon vibrated to the sound of fiddles and banjos over the weekend as the Kluane Mountain Bluegrass Festival picked up speed for the first time since 2019.

The annual bluegrass festival has been canceled for the past two years due to COVID-19 restrictions, but according to Mark Nelson, one of the festival organizers, this year’s events are off to a “flying start”.

“You could tell the energy was really excited to come back here and hear live music again,” he said on Saturday.

The festival took place over three days from Friday to Sunday and featured local and international bluegrass music acts.

Nelson said tickets sold out months before the festival started and the concert hall at the St. Elias Convention Center was packed every day.

Veranda, a bluegrass band from Montreal, Quebec, was one of the guest artists.

“I feel that everyone is thirsty [for] culture, shows and events and festivals,” said Léandre Joly-Pelletier, one of the group’s members.

This was Veranda’s first time touring the Yukon and the band will also be making stops in Whitehorse and Dawson City later in the month to perform.

Seth Mulder and the Midnight Racea band from Tennessee, performed at the festival Saturday night.

“It’s like being home away from home,” he said.

Volunteer security guard Rick Nadaud has accompanied the festival since its creation in 2003.

Nelson says the festival wouldn’t be possible without all the volunteers who help each year. The festival was still looking for volunteers a few days ago, but Nelson said those positions were filled in time for the event.

“The motto is ‘Music, Mountains, Magic,’ right?” Nelson said. “And I think that sums it up pretty well.”